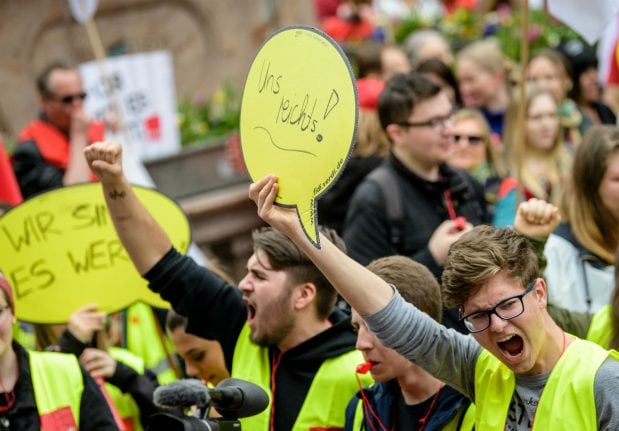 Public transport in the city of Düsseldorf was brought to a standstill on Wednesday as underground, tram and most bus lines ground to a halt due to the strike.

“Everything is shut down here,” said a Ver.di spokesman of the situation in the state capital of North Rhine-Westphalia (NRW), where 2,000 public workers went on strike at 3am.

Public transport was also thrown into chaos across the three states of Rhineland-Palatinate, Hesse and Baden-Württemberg, where the Rhein-Neckar Transport Company (VRN) operates. The VRN, which serves around three million people in cities including Mannheim, Kaiserslautern and Heidelberg, has cancelled all services due to the strike action.

Meanwhile, inner-city public transport has been cancelled in Wiesbaden and in Würzburg,

In Nuremberg, 130 of the city’s 140 kindergartens were closed due to the industrial action.

In Rhineland-Palatinate hospitals and child care facilities have been affected across the state, while in Hesse hospitals are taking the brunt of the action.

Ver.di. aims to increase the pressure on public service employers shortly before the next round of wage talks scheduled for April 15th and 16th.

The union, which represents 2.3 million public workers in the country, is asking for a six percent pay increase for public service workers from state and local governments, with a minimum increase of €200 each month.

On Tuesday, airports were badly hit by the industrial action, with Lufthansa cancelling 800 flights.

The union has warned the government that if it does not meet their demands during negotiations next week, the industrial action will be ramped up.

“We’ll have to intensify the action if no agreement is met,” Ver.di boss Frank Bsirske said on Tuesday.