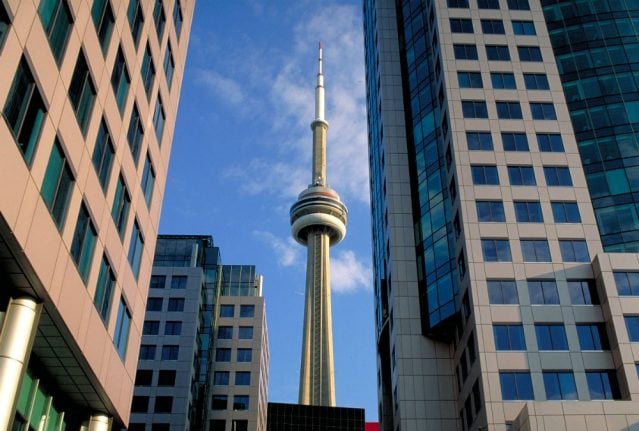 As soon as I arrived at Toronto’s Pearson Airport in late March, I immediately noticed two things that reassured me I was indeed home: all the automobiles were bigger than what I was used to seeing and it was still cold and wintry outside.

After my parents picked me up from the airport, more things reminded me that I was no longer in Germany: the expansive, multiple lane highways and the fact that it would still take around 45 minutes (roughly 50 kilometres) to get to their house by car – not far by Canadian standards.

Upon immediately exiting the airport, all I spotted were big cars. Photo: Shelley Pascual

Those of you from North America probably understand what I mean when I say the concept of space and distance is just different across the pond.

In Berlin, my adopted city, it takes about an hour to get to Schönefeld Airport from my flat via public transport. But taking the public transport to get to my parents’ place in Toronto from Pearson Airport requires over double this time (sans foreseeable congestion delays) with several train and bus changes.

I know what you might be thinking. “So it’s farther and takes longer to get places. Big whoop.” But let me explain.

As a Bachelor’s student over a decade ago, all throughout the four years of my programme I commuted to university in downtown Toronto from where my parents lived at the time (a suburb north of the city). This took 1.5 hours each way, meaning that five days a week, I spent three hours a day on public transit.

Needless to say, four years of this insane amount of travelling took its toll on me. What’s more, on weekends I’d take buses and trains into the city too, as there was nothing fun to do in the ‘burbs. I realized early on that in order to uphold any kind of lifestyle in Toronto, you absolutely need a car.

In hindsight, one of the major reasons why I felt compelled to leave my native country for good back in 2010 was frustration with this car-reliant culture – especially as someone who could not afford to own a car.

Nowadays each time I visit home, which averages out to about once a year, when I have to endure hours of motion sickness switching from bus to train just to get downtown or visit friends on the other side of the Greater Toronto Area, I’m reminded of why I left.

By way of comparison, Germany offers so much more value in terms of quality of life.

A few years ago, when I lived in a middle-sized city in Lower Saxony called Braunschweig, I discovered an invigorating freedom I had never known before. To get into the city centre from my flat, it took less than 15 minutes by bike. My commute to work was only roughly 30 minutes – also by bike.

READ ALSO: Braunschweig – The German city that deserves to be put on the map

Similarly, a car isn’t necessary if you live in Berlin. These days I don’t even have to take public transport to get into the capital’s central Mitte neighbourhood, which isn’t more than a 20-minute bicycle ride away from where I live. Cycling to work takes me even less time – a mere 15 minutes door to door.

As I recently witnessed for myself, family and friends of mine who happen to live in inner city Toronto don’t need cars either. But a key difference remains: while we might live in central areas of our respective metropolises, my rent is comparatively less.

Looking down on a busy street in downtown Toronto from my sister's condo. Photo: Shelley Pascual

According to RentSeeker, a typical bachelor apartment in the downtown area of Canada’s largest city goes for about €1,055 ($1,625 CAD). This is about double the amount I dish out each month to pay for my Berlin bachelor apartment just north of Mitte.

And don’t even get me started on the disparity between Canada and Germany when it comes to paid time off and work-life balance. Almost as bad as the US, which doesn’t guarantee its workers paid vacation, Canada for the most part mandates a mere ten days of paid vacation annually.

During my trip home this came to light once again while I was chatting with a friend of mine who works in the fashion industry. Having worked at her company for over four years, she still only gets ten paid days off work per annum.

I’m sure German workers would shake their heads in disapproval at hearing this; more than half of them (53 percent) take 30 days’ leave per year. In the Bundesrepublik, the minimum vacation entitlement is 20 working days a year for a five-day work week.

If my friend gets sick, she says she feels pressured to drag herself into work since all of her colleagues do so when they’re ill. In Canada there’s no law which stipulates that an employer must pay an employee for time off taken due to illness. Meanwhile in Germany an employee only actually needs to show their employer a doctor’s note on the fourth day of sickness, as mentioned in our guide outlining what to know when you get sick here.

Sure, there are certain things which do entice me to consider making the move back across the pond. For instance, the country’s multiculturalism, open-mindedness and the friendliness of Canadians are qualities which make it stand out from other nations.

But when I really stop to think about all the advantages and disadvantages of living in Toronto versus Berlin, the latter wins hands down.

Until there exists a Canadian city or town that offers reasonable rent, labour rights on par with those in Deutschland and a lifestyle which would allow me to bike around town, I’m staying right where I am.