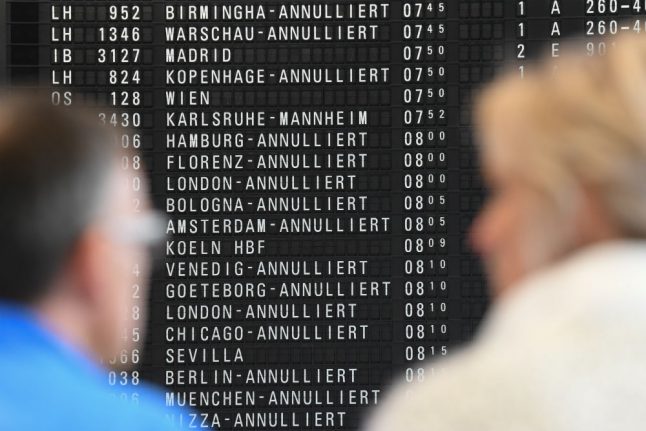 Hundreds of flights have already been cancelled at the airports in Frankfurt, Munich, Cologne and Bremen. Travellers had been warned by Ver.di boss Frank Bsirske to expect severe restrictions and to prepare for massive delays throughout the day.

An estimated 90,000 air passengers have been affected by flight cancellations across the country. German airline giant Lufthansa cancelled more than 800 out of its 1,600 flights scheduled for Tuesday.

Passengers are recommended to check with individual airlines to see whether their flight is still set to depart.

At Munich Airport, the country’s second largest airport, Lufthansa cancelled 240 domestic and international flights. In Cologne, 70 flights were cancelled. As a result, flights at other airports such as Berlin’s Tegel Airport and the Leipzig/Halle Airport were also cancelled.

In the Ruhr region, municipal transport companies went on strike in several cities, including Dortmund, Duisburg, Cologne and Essen. According to Ver.di, all subway lines as well as light rail and bus lines will be out of service in these cities until late at night on Tuesday.

The strikes had a moderate effect on Tuesday's morning rush hour traffic in NRW as numerous commuters opted to carpool or take regional trains instead. The police in Cologne initially reported that there had been no huge traffic jams or major accidents.

Several cities in NRW also announced that kindergartens would remain closed for the day. Waste collection services, banks, city administration offices, hospitals and shipping traffic may also be affected by the warning strikes – depending on the number of employees who participate in the industrial action.

Further down south in Bavaria, according to Ver.di the strikes will affect city cleaning and waste collection services, kindergartens and hospitals.

Numerous strikes are planned in Baden-Württemberg between Tuesday and Thursday which will affect kindergartens, clinics and waste collection services. On Thursday, the Stuttgart tram company SSB and urban transport in Esslingen will also be cancelling services; Ver.di warns this will likely have a “very severe impact” on public transport in the greater Stuttgart area.

In Hanover, Lower Saxony, the union says there will be “no buses and trains, garbage collection, or city cleaning services” for the day.

In Berlin, employees of the state-owned hospitals Charité and Vivantes will also be taking part in the warning strikes. In Brandenburg, city authorities in Schwedt, Eberswalde and Prenzlau are on strike.

In addition to Tuesday’s warning strike at Frankfurt Airport, in Hesse, public service employees in the northern area of the state are also on strike. On Wednesday, health care workers in southern Hesse and public transport in Wiesbaden plan on striking, followed by public service workers in central Hesse on Thursday.

In the federal states of Rhineland-Palatinate and Saarland, Ver.di states that “on various days until Friday the administration departments, kindergartens, public hospitals, waterway and shipping offices, public utility companies and local public transport will be on strike.”

Ver.di. aims to increase the pressure on public service employers shortly before the next round of wage talks scheduled for April 15th and 16th.

The union, which represents 2.3 million public workers in the country, is asking for a six percent pay increase for public service workers from state and local governments, with a minimum increase of €200 each month.