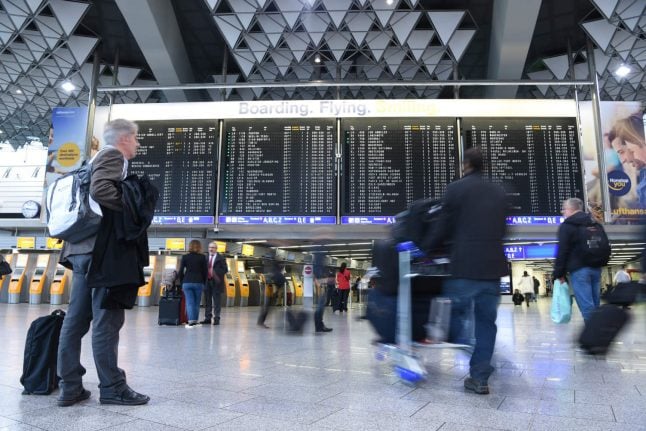 Ver.di boss Frank Bsirske said in Berlin on Monday that severe restrictions are to be expected.

Frankfurt Airport, Germany’s largest airport, warned on its website on Monday that the strikes could lead to “considerable delays in operating procedures and also to cancellations.”

Particularly affected at Frankfurt Airport on Tuesday will be the security control areas for gates A-Z in Terminal 1, which are all set to be closed. Long waiting times are expected at the airport's other security areas.

“Rallies by the strikers could also lead to obstructions to transport routes, meaning reaching the airport by car will take longer,” the airport said.

Munich Airport similarly warned on its website that due to the industrial action, “longer waiting times at all security checkpoints during the entire day” are to be expected.

Air travellers in the Bavarian capital are advised to allow extra time for their journey at Germany's second busiest airport and to “come as early as possible.”

Ver.di is asking for a six percent pay increase for public service workers from state and local governments, with a minimum increase of €200 each month.

The union, which represents 2.3 million public workers in the country, has stated that its workers are not being fairly compensated for the amount of work they do, despite employers having the money to pay at a higher and fairer rate.

Ver.di is hoping to increase pressure on employers ahead of the next round of wage talks on April 15th and 16th.

Meanwhile there will also be strikes in other areas throughout Germany in the coming days, according to Ver.di. In North Rhine-Westphalia, for instance, local transport, kindergartens, public utility companies and city authorities will also be on strike on Tuesday.

Strikes are to be expected in all federal states until 13th April, the union added.