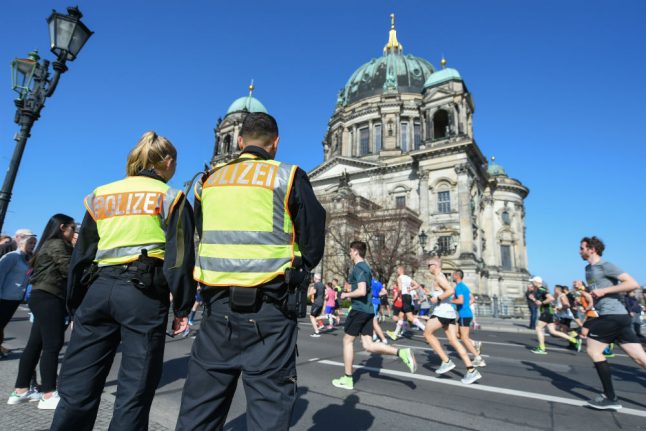 Prosecutors and police said in a statement on Sunday they had received “isolated indications that those arrested (on Sunday) between the ages of 18 and 21 may have been involved in planning a violent crime in connection with this event”.

But police later appeared to back away from this claim, telling DPA that there were no concrete indications that the marathon was the target of a terrorist attack.

“At no point were runners or participants in any danger,” a police spokesman assured DPA.

It added that the suspect had links to Tunisian asylum-seeker Anis Amri, who carried out a deadly truck attack on a Christmas market in the German capital in December 2016.

But a source close to the investigation told AFP that the Welt report that a knife attack was being planned “went too far”.

Police would only go as far as to say that the arrests were made on the basis of the isolated indications and in light of the fact that a man drove a van into a crowd of people on Saturday in the western city of Münster in what resembled a terror attack.

“Due to the still ongoing investigation, no further information can be provided at this time,” they added.

A police spokesman told AFP later that they had confiscated “data storage devices, mobile phones, two vehicles and a small knife” during the raids.

He confirmed that the suspects arrested “might have planned something during the half marathon” but “we don't know what exactly”.

The half marathon went off early Sunday without incident amid warm spring sunshine.

Berlin's top security official, Andreas Geisel, had said that the city of 3.5 million people would need to review its precautions for the half marathon following the Münster attack in which two people were killed.

Some 630 police officers were deployed to guard the race.

Authorities believe the 48-year-old German perpetrator of the Münster attack, who shot himself dead, had mental health problems and was not politically motivated.

In Germany's worst jihadist attack to date, Amri hijacked a truck and murdered its Polish driver before killing another 11 people and wounding dozens more by ploughing the heavy vehicle through the crowd.

The daily Tagesspiegel reported earlier that a “foreign intelligence service” had warned Berlin police of the possibility of an attack on the half marathon. And it confirmed suspicion of a link between one of the suspects and Amri.

Like other European nations, Germany remains a target for Islamist militant groups, in particular because of its involvement in the coalition fighting IS in Iraq and Syria, and its deployment in Afghanistan since 2001.

A court last month sentenced a 26-year-old Palestinian asylum seeker to life in prison for killing one and wounding six others with a knife in a Hamburg supermarket out of a “jihadist” motive last July.

Germany's security services estimate there are around 10,000 Islamist radicals in Germany, some 1,600 of whom are suspected of being potentially violent.

Political opponents of Chancellor Angela Merkel, including the far-right AfD party, have charged that the security situation has worsened with the arrival of more than one million migrants and refugees since 2015, many from African and Middle Eastern conflict hotspots.