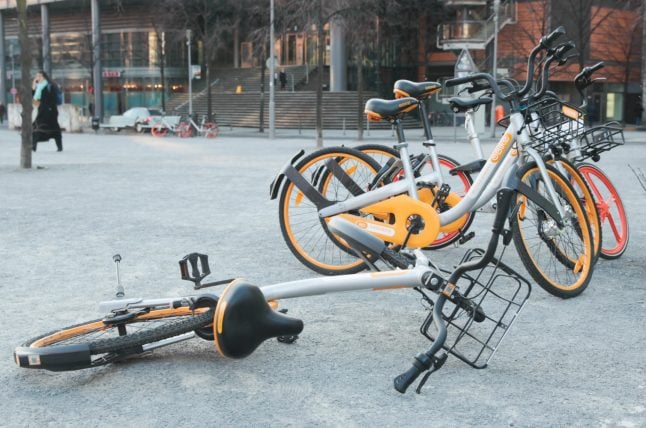 With dozens of companies now offering bike-sharing services in cities across Germany, it has never been easier to get around town on two wheels.

Yet with more and more rental bikes in circulation, residents in many cities are complaining that badly parked bikes are getting in the way of their daily life.

“Since the new bike rental systems started in Frankfurt, we have noticed that bikes are often carelessly left blocking pavements, in cycle lanes or even in parks,” said Susanne Neumann, a spokesperson for the Frankfurt branch of the General German Cycle Club (ADFC).

So-called “free-floating” bikes, which can be picked up and dropped off anywhere in a city, are causing a particular problem.

“Free-floating bikes are a great idea, but when dozens of them are left blocking pavements and entrances to buildings, they become a nuisance, and that is poisonous for the reputation of rental bikes,” ADFC spokesperson Stephanie Krone told DPA.

Other organisations such as the Bicycle Industry Association (ZIV) have accused cities of being badly prepared for the arrival of free-floating bikes.

In some places, the problem of poorly parked bikes has led to what Klaus Oesterling (SPD), head of Frankfurt’s department for transport, has described as an “untenable” situation.

In some places, the authorities are beginning to fight back. In January, the city of Cologne introduced measures to ban cyclists from leaving their vehicles in certain areas, such as around the city’s iconic cathedral.

In Munich and Frankfurt, authorities have published a catalogue of requirements for rental bike providers, with guidelines on how bikes should be parked and a recommendation of a maximum number of bikes per designated drop-off point.  The ADFC, meanwhile, has suggested transforming car parking spaces into bicycle drop-off stations.