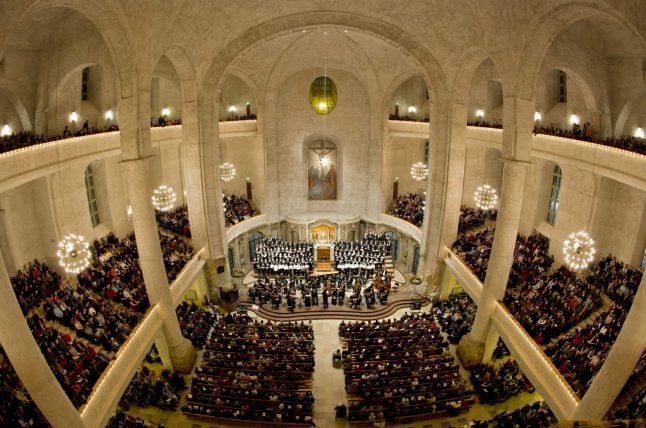 Earlier in the year I wrote a somewhat unpopular article arguing that people who live in Germany have a duty to learn the language so that they are aware of social changes going on around them such as increased homelessness.

Readers criticized me for claiming that people have to understand the language to notice these social changes. Overall, I was bashed for having a rather finger-pointy attitude for why people should pick up the local tongue.

Well, I am here again to tell people that they should learn German. But this time, in the Easter spirit, it is a message of love.

The message is this: learn German because only then you can properly appreciate Bach’s Johannes-Passion, surely one of the most wonderful pieces of music ever created.

One of the major frustrations that I have found in learning German is that it can be hard to find modern German culture which is truly distinctive or even of a particularly high quality.

I've tried to find a German television show that I enjoy watching. The closest I have come is the recent Netflix series Dark, but the cliched screechy string music and ropy scripting often left me wondering whether I would bother if it were English.

There are some great German movies – Das Leben der Anderen and the 2016 release Toni Erdmann are two personal favourites – but too often I find that German cinema earnestly examines the country’s recent history rather than taking risks with new subject matter.

Sometimes this can take the joy out of learning the language. If it feels like a slog to listen to the music or watch the films, it can be hard to adapt to the local culture.

Browsing back into Germany's illustrious cultural past, there is plenty to dig your teeth into – it isn't called die Sprache der Dichter und Denker (the language of poets and thinkers) for nothing. But, ultimately, films can be watched with subtitles and great books normally have great translations. You have to be pretty committed to picking up on the subtleties in Goethe to insist on reading Faust in the original.

My own encounter with Johann Sebastian wasn't one that I went into with particularly high expectations.

Philistine that I am, I had little knowledge of Bach and his music, beyond being able to say with some level of assurance that he made music at some point before Mozart and Beethoven and that he is connected to Easter.

So on Friday I thought it would be fitting to attend a Bach concert and do Easter the German way. I headed down to the Kaiser Wilhelm Memorial Church in Berlin for a performance of the Johannes-Passion, expecting to find a dusty choir performing to a sparse crowd.

Instead the queue outside the entrance was already 30 metres long when I arrived an hour before the start.

Latecomers walked down the line, pleading desperately for spare tickets. By the time the choir made their entrance, there wasn’t a free seat in the house.

Before the music started, the conductor instructed us at the start not to clap at any point during the performance – a clear indication that what was to come was not a mere concert but more of a religious rite.

I noticed everyone around me reading from a pamphlet we had been handed on the way in and which I had supposed just gave the normal dry details about the conductor and the choir. Instead I opened it to find the script of a play which recounts the last days in the life of Jesus according to the Gospel of John.

After the chorus fall silent for the first time, a narrator set the scene at the Mount of Olives.

“Jesus crossed the Kidron stream with his disciples, there was a garden, Jesus went inside with his disciples,” the narrator, a tenor, sang. He then went on to sing the story of how Judas brought the high priests of Jerusalem to the same spot – without a single rhyme in his lines.

“Wen suchet ihr? (who are you looking for?)” a baritone, playing the part of Jesus, booms out.

This strange piece of music goes on for another two hours in much the same manner.

The drama reaches its high point when the high priests and the Jewish crowd try to convince a reluctant Pontius Pilate to crucify Jesus.

Pilate tells the crowd that he “finds no guilt in him”. But they cannot be appeased and the chorus screams back furiously: “kreuzige kreuzige! (crucify, crucify!)”

Bach doesn't spare on the grim details, describing how Romans break the legs of the two men being crucified next to Jesus. Christ himself dies after inhaling vinegar and exits the drama by singing a single lines: “es ist vollbarcht” (the deed is done).

The most beautiful aria comes close to the end when the fragile voice of a soprano fills the church, imploring her heart to “melt in floods of tears in honour of the highest.”

I was gripped from beginning to end. I have heard the story of the last days of Jesus more times than I care to remember, but I have never heard it told with such emotion and drama.

And throughout the performance I kept thinking how lucky I was that I knew enough German to understand one of the greatest works of both music and theatre Christianity has produced.