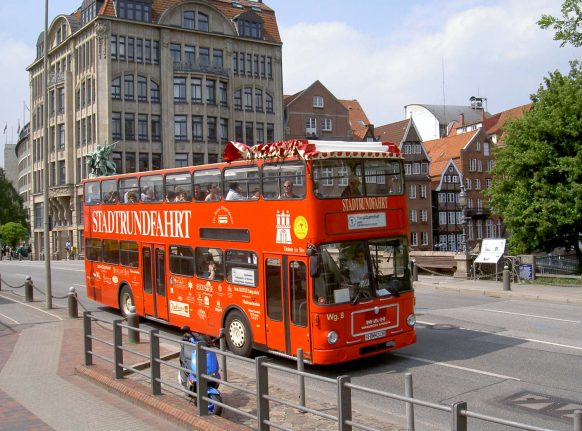 The Hamburg Fire Department issued a press release concerning the accident on Monday afternoon. They report that the crash occurred when the sightseeing bus packed with tourists collided with the car at high speed, resulting in four serious injuries and leaving the passengers of the car and bus trapped in their vehicles. As of yet, the cause of the accident is unknown.

A large number of personnel from the Hamburg Fire Department, Bundeswehr Rescue Service and the German Red Cross were immediately sent to the scene, where first responders treated the four individuals with severe injuries.

Seven passengers on the tourist bus were also found to have suffered minor injuries, and were also treated within the ambulance of the Hamburg Fire Department at the scene of the crash.

The Hamburg Fire Department said that the four seriously-injured persons, who were all riding in the car involved in the crash, were only able to be freed from the vehicle through the use of a hydraulic cutting machine.

After they were rescued, all four were cared for by emergency attendants on-scene before being transported to the hospital’s emergency room via helicopter. They are currently being treated by local physicians.

Among those brought to the hospital was a pregnant passenger from the sightseeing tour bus, who the Hamburg Fire Department believes was unharmed in the incident, but examined as a precautionary measure.

Hamburg’s Fire Department praised the response of emergency personnel in their press release, saying that “first responders provided and cared for the 11 injured… in an exemplary manner and effectively supported the rescue measures of the Hamburg Fire Brigade.”

Among the first responders present at the crash was a Mönchengladbach Fire Department employee, who was visiting Hamburg for the Easter holiday.

The accident itself required a mass-effort on the part of Hamburg’s emergency response team, and involved more than six ambulances, a fire service crane and a rescue helicopter.