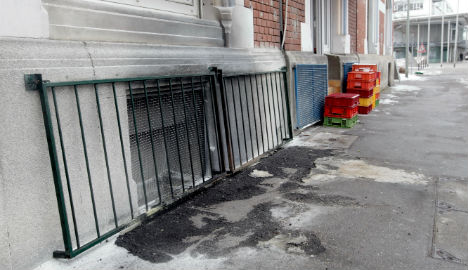 Charred windows outside the Ulm house used as a mosque. Photo: Ralf Zwiebler/dpa
The attack in the southern city of Ulm on March 19 caused only material damage and the eight people inside the building at the time were unharmed, local police said in a joint statement with Stuttgart prosecutors.
The suspects, aged 18 to 27, were arrested on Wednesday. One of the men has already confessed to the crime, according to the statement.
The 3 am (0100 GMT) attack saw several Molotov cocktails lobbed at the building, one of which started a fire that was quickly put out by police.
Prosecutors said they suspect the attack “may have been politically motivated”, but according to DPA news agency they declined to comment on reports that it was an act of retaliation over the Turkish offensive in the Syrian enclave of Afrin.
“The investigation, including into the motive of the Syrians… is ongoing,” the statement read.
Several mosques, cultural centres and shops frequented by Germany's Turkish community have been targeted in a string of attacks in recent weeks amid tensions over Turkey's actions against Kurdish militia in Afrin.
The Kurdish Community in Germany group earlier this month sharply condemned the attacks as well as social media calls that were “urging Kurdish youths to employ violence against Turkish institutions”.
Germany is home to three million ethnic Turks and hundreds of thousands of Kurds.
Url copied to clipboard!