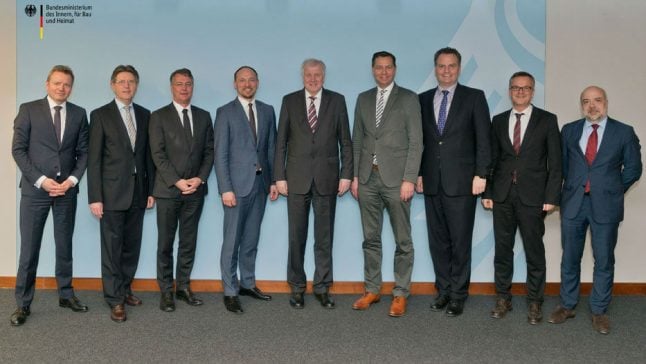 Twitter users fell on the photo of Minister Seehofer flanked by a staff of middle aged white men, which critics said showed he was out-of-touch and out-of-date.

The photo briefly appeared last Friday on the website of the newly-expanded “Interior, Homeland and Construction Ministry,” alongside an announcement of the all-male line up.
It was later taken down again, but it was too late. By Tuesday, it had resurfaced and was doing the rounds online.
“Not my homeland,” tweeted Green MP Hannah Neumann.

Another user sarcastically suggested that three of the nine men were wearing grey suits instead of black in a nod to diversity.

Still another simply tweeted a picture of sausages titled “the full leadership team of the BMI [interior ministry].”

The ministry has attempted to play down the reaction and has denied that it temporarily removed the photo in response to criticism.

The photo had instead been “depublished,” a spokesperson told DPA news wire, to avoid jumping the gun on the cabinet's final approval of the team. It was then republished on Wednesday afternoon after the cabinet had signed off on it.

The spokesman defended Minister Seehofer's staff choices, saying he had appointed “those who in his eyes were the right people.”

This is the second scandal to hit Minister Seehofer in the few weeks since he joined Chancellor Angela Merkel's cabinet. Within a week of his appointment he sparked outrage after stating that Islam didn't belong to German culture.

Germany's new coalition government has said it wants to fill 50 percent of government leadership roles with women by 2025. But there is still a long way to go – a total of 45, or more than 70 percent, of the 63 state secretaries announced last week are men.

Not only the current interior ministry, but also the economics, transport and agricultural ministries have no women in their leadership teams – the latter despite being headed up by a female minister, Julia Klöckner.