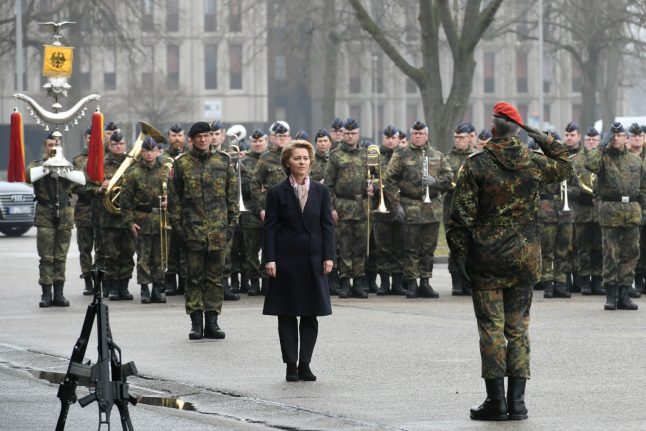 Defence Minister Ursula von der Leyen presided over the rededication ceremony of the Emmich-Cambrai barracks, which was initiated by soldiers to honour fallen comrade Tobias Lagenstein, one of 57 German soldiers who have died in Afghanistan since the deployment began in late 2001.

The site in the city of Hanover had previously been named after Prussian general Otto von Emmich, who helped lead the invasion of Belgium during World War I.

Cambrai in northern France was occupied by German troops during the same war and was the site of the first major battle between German and British tanks.

Lagenstein, 31, who trained as a military policeman at the base in Hanover and was killed in a Taliban attack in 2011, is the first fallen Bundeswehr soldier to have barracks named after him.

A previous initiative in 2012 had failed but gathered steam again after a scandal last year over an alleged attack plot by a soldier linked to the far-right.

Now around 20 barracks are facing scrutiny for names associated with the Nazi-era Wehrmacht.

Von der Leyen said the renaming ceremony “offers a worthy occasion” for the Bundeswehr armed forces to embark on a new approach toward Germany's military history.

Presenting a new “tradition directive”, the first since 1982, she said the end of Germany's Cold War division and the new security threats of the 21st century required “a shared consensus on our past”.

“We are the armed forces of a mature, globally respected democracy,” she said.

Despite the bravery of individual German soldiers in the past, neither the Nazi-era Wehrmacht nor the East German People's Army could “as institutions be included in our canon of traditions”.

The new guidelines however specifically include “exemplary” actions from the past including “military resistance” to the Nazi and communist regimes as well as “particular contributions to German unity” before and after the fall of the Berlin Wall, von der Leyen said.