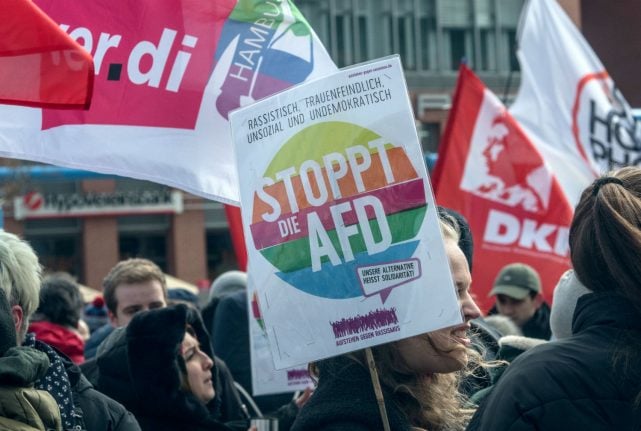 A protest against the AfD. Photo: DPA

The survey by the Berlin wing of the party asked Twitter users to answer with yes or no the question of whether Islam belongs to Germany. Screenshots show that 83 percent of the 20,000 participants answered that yes, Islam does belong to Germany.

One of the central slogans of the far-right party is that “Islam gehört nicht zu Deutschland” (Islam doesn’t belong to Germany).

By Tuesday afternoon, the survey had been deleted from the AfD Berlin account.

“Now the AfD Berlin has deleted its survey, accidentally of course! What idiocy!” the head of the Green Party in Berlin, Werner Graf, wrote of Twitter.

“Luckily I took a photo so that their hard work wouldn't be for nothing,” he added.

“This case shows that the party that claims to speak in the name of the people hides away when they notice that they don‘t represent popular opinion at all,” Graf later told DPA.

Ronald Gläser, spokesman for the AfD in Berlin, said that “deleted is deleted – it can’t be published again. I wouldn’t have done it – the deletion wasn’t necessary.”

The result of the survey is likely due to the Twitter account of a left-leaning comedy show encouraging its followers to take part.