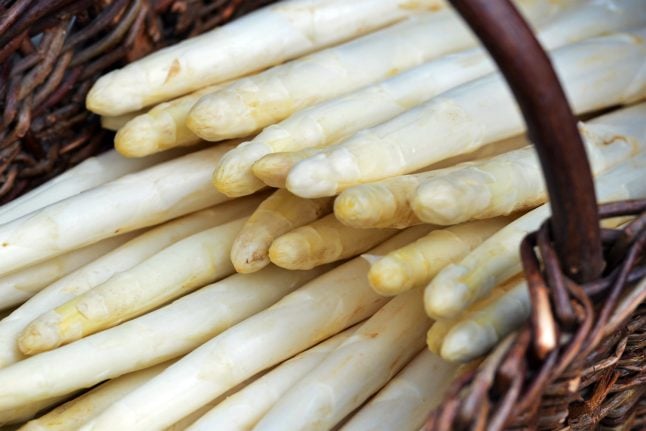 Whereas German asparagus can normally only be picked starting in April, the first Spargel (asparagus) in northern Greece was harvested at the end of February. Around 90 percent of the “white gold” was packed up and delivered to Germany to sate the Teuton appetite for the Roman root.

Greeks themselves don’t have much of an appetite for the wriggly white vegetable.

“There are barely any recipes for it and the way the Germans cook it is completely unfamiliar to us – we only eat green asparagus in a salad,” says Anastasios Karkatzalos from the Greek growers’ association, Nestos.

A ripe market in Germany

Exporting to Germany makes financial sense too – the prices in Deutschland are much higher than at home. As well as being one of the major asparagus producers in Europe, Germany also has one of the largest markets for the vegetable, particularly the rarer white variety.

The Greeks know that the average German consumes 1.7 kilograms of asparagus a year – and that German asparagus farmers are therefore gradually expanding their cultivation areas. According to the Federal Ministry of Agriculture, German arable land dedicated to Spargel has been expanded from 19,000 to 22,300 hectares within the five years up to 2016.

The Greeks charge between five and eight euros per kilo for vegetables, depending on quality, season and demand.

That is why it is extremely rare to find white asparagus at Greek farmers' markets, even though it tastes better than German asparagus, as Maragkosis finds. “The Greeks do not buy asparagus at the prices achieved in Germany,” he says.The only problem for the Greeks is that the weather has to play ball.

“Germans are chauvinists when it comes to asparagus. As soon as their own asparagus is ready to pick, they take that and don’t bother with imports,” says Spyros Papadopoulos, a politician from the asparagus-rich region of Thrace.

Finding the right season for Spargel

That means that the Greek Spargel has to be ready to pick before the beloved Spargelsaison (asparagus season) starts in Germany.

This year the gods haven’t been kind.

“First it was cold, so the asparagus came late. Then there was sunshine and warmth for a week, then clouds, cold, rain again,” says Karkatzalos.

Ideally the Greek asparagus farmers need the sun and heat to arrive early, making the asparagus ready for export sooner. Asparagus also needs a cold winter, ruling out cultivation in regions such as Crete in the south of the country.

Asparagus farmers are also dependent on the weather in Germany.

“If spring is too cold in Germany, people there have no appetite for asparagus,” Kostas Maragkosis, a Greek asparagus farmer, complains.

For Greek farmers, growing asparagus is a bit like playing roulette – lucrative, but also risky.

“Asparagus is a nervous vegetable, you shouldn't stress it,” says Maragkosis.