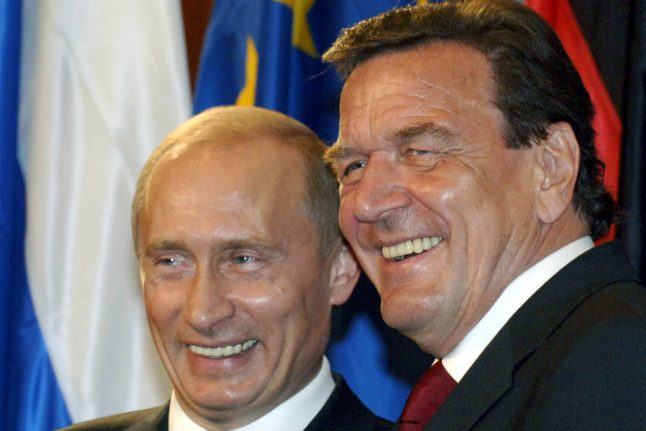 “It is important that there are sanctions against those who advance Russian President Vladimir Putin)'s projects abroad,” Klimkin told German daily Bild in an interview published on Monday.

“Gerhard Schröder is Putin's most important lobbyist worldwide. It should be examined whether the EU can take action.”

Klimkin's comments came after a similar call by the Wall Street Journal in an editorial on Friday.

Just weeks after leaving office in 2005, Schröder – a close friend of Putin – became head of the shareholders' committee of Nord Stream which delivers gas to Germany through a Baltic Sea pipeline and is majority-owned by Russia's Gazprom.

Last August, Schröder again drew fire for accepting a $500,000-a-year pre-tax board job with state-controlled Russian oil giant Rosneft, which is subject to Western sanctions over Moscow's role in the Ukraine conflict.

“I don't think what Schröder is doing is okay,” his successor Angela Merkel said at the time, joining a chorus of public criticism of the centre-left Social Democrat who served from 1998 until Merkel defeated him in 2005.

But her spokesman Steffen Seibert said Monday that Berlin had no plans to seek punitive action against Schröder.

“The German government, and the chancellor, do not see any reason to pursue considerations of this kind,” he said at a news briefing.

The European Union last week extended by a further six months sanctions against Russian and Ukrainian officials over their suspected involvement in the conflict in eastern Ukraine.

The EU also has individual sanctions in force against Russia over its 2014 annexation of Crimea from Ukraine.