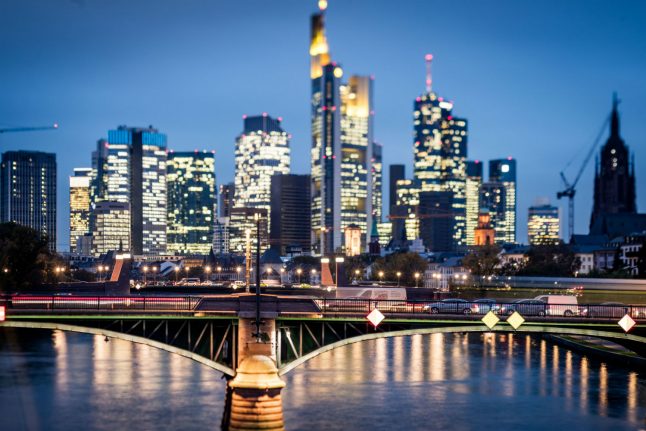 “From April there will be sizeable moves” by banks setting up shop in the city on the Main river, Hubertus Vaeth of Frankfurt Main Finance, which helps advise banks on such shifts, told AFP.

Financial supervisor BaFin is handling more than 10 requests for German banking licenses, a spokesman for the authority said.

Around 100 banks are expected to move some activities out of London when Britain quits the European Union in one year's time.

Departing from the EU will likely mean the loss of so-called “passporting” rules that allow lenders to sell their services unrestricted in the other 27 member countries, meaning they will need a presence on the mainland to continue operating.

But only around 40 banks have so far declared their plans.

Based on announcements to date, Frankfurt could gain up to 5,000 jobs as mostly US and Japanese banks move operations there, the Association of Foreign Banks in Germany said last week.

That puts it in pole position compared with continental rivals like Paris, Amsterdam, Dublin and Milan.

German politicians and bankers are smarting from the EU's decision to move the European Banking Authority regulator from London to Paris, rather than stabling it alongside the European Central Bank in Frankfurt.

“Paris got a big boost” from the move, lobbyist Vaeth acknowledged, while arguing that “the wind has not changed” in the French capital's favour in the broader race to mop up business leaving Britain.

“Frankfurt remains the preferred financial centre, that's what comes out of the majority of our conversations,” he added.

Meanwhile the Association of German Banks (BdB) called on Europe to “do as much as possible” to avoid a sudden Brexit with no trade agreement in place.

UK negotiator David Davis and EU representative Michel Barnier announced Monday that the UK would get a “transition period” of around two years after Brexit day on March 29, 2019 when it will enjoy all the benefits — and follow all the rules — of the EU single market and customs union.

The BdB also welcomed the reelection of Chancellor Angela Merkel, saying her new government “has committed to increasing the attractiveness” of Germany and Frankfurt for financial firms.