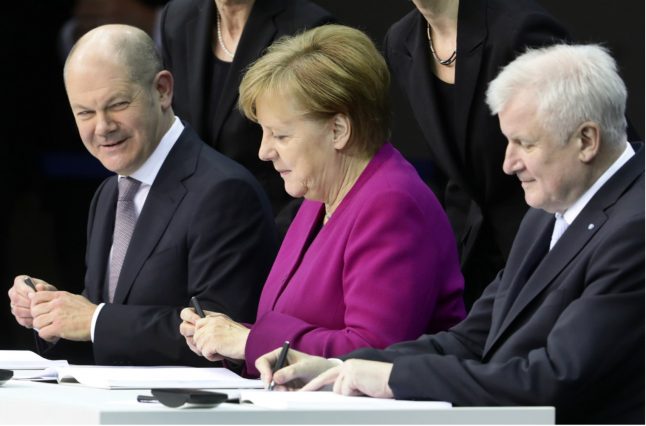 As her conservative CDU/CSU bloc and the centre-left Social Democrats get ready to govern together once again, here's a look at the main priorities set out in their coalition agreement, which will guide policy-making for the next four years.

The power pact thrashed out between the two sides symbolically opens with a chapter called “a new start for Europe” — signalling that efforts to reform the EU will top the incoming government's agenda as the bloc grapples with rising nationalism, security concerns and an unpredictable US ally in President Donald Trump.

“In a world that's becoming more complex… it is essential that Europeans stick together,” the new vice-chancellor and finance minister Olaf Scholz said at the coalition treaty's signing ceremony.

The accord welcomes French President Emmanuel Macron's ambitious push to overhaul the bloc, pledging to “in close partnership with France, sustainably strengthen and reform the eurozone so that the euro can better withstand global crises”.

As well as agreeing to bolster EU foreign and defence policy, the parties say they are ready to raise Germany's contributions to the European Union's budget once Britain leaves.

They also support the creation of a European Monetary Fund that could lend to countries in crisis, but offer only cautious backing for Macron's idea of a eurozone investment budget — which Berlin fears could translate into a transfer of German cash to troubled economies.

The document makes no mention of Macron's controversial proposal for a common eurozone finance minister.

Merkel plans to meet with Macron in Paris in coming days to discuss the proposals ahead of an EU summit late next week.

Anger over Merkel's 2015 decision to open the country's doors to hundreds of thousands of asylum seekers led to a surge in support for the far-right Alternative for Germany (AfD) party, which scored almost 13 percent in September's polls.

Smarting from the backlash, the government now aims to cap the annual intake of people seeking safe haven to around 200,000, in line with a long-standing demand of the CSU.

CSU heavyweight and new interior minister Horst Seehofer has vowed to quickly put in place a “master plan” to speed up asylum procedures and deportations. “The number of expulsions must increase significantly,” he said.

At the EU level, Merkel says she continues to expect member states to take in their allocated share of refugees — anathema to some central and eastern European nations.

The chancellor has also reiterated the need to tackle “the root causes of migration” with development aid for the countries of origin, while better securing the bloc's outer borders.

But that has done little to assuage concerns about globalisation and automation in the workplace, which Scholz says has left “many citizens afraid for their own professional future”.

With its flush public coffers, Merkel's fourth government aims to address these fears through investments in infrastructure, an offensive to improve the nation's creaking internet networks, pension reform and more funding for education and life-long learning.

“We are living through a period of change that will probably transform the world as much as the shift from an agrarian to an industrial society,” Merkel has said.

Acknowledging concerns about growing inequality in wealthy Germany, she added that “our country's prosperity must reach all”.

But while her team is willing to loosen the purse strings to get Germany future-ready, there's no question of taking on new debts. As in previous years, the coalition partners have pledged to stick to a balanced budget.