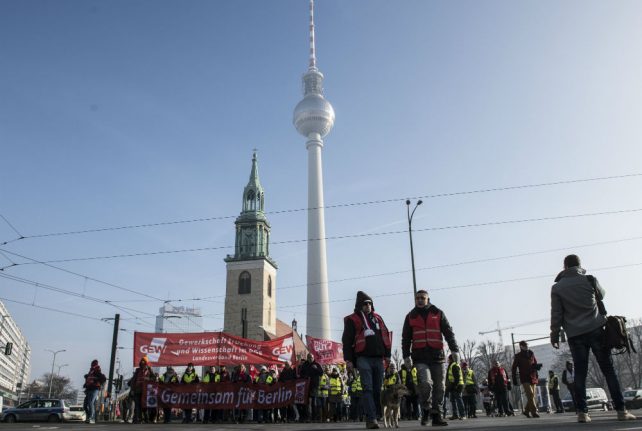 Public sector workers at a warning strike in Berlin in February. Photo: DPA

The unions, representing some 2.3 million public employees, are seeking a six-percent pay rise or at least an additional €200 ($245) a month over the coming year.

But employers have failed to make an offer despite two rounds of talks, Germany's leading services sector union Verdi said in a statement. It called for hours-long warning strikes to begin “before Easter”.

The unions did not specify which sectors would be targeted. A series of similar strikes in 2016 severely disrupted life in Germany when rubbish collection, daycare, hospitals and transport were hit by walkouts.

Employers have dismissed the latest wage demands as too expensive. Verdi leader Frank Bsirske said the unions' demands were justified given Germany's 36.6-billion-euro budget surplus in 2017.

“The economy is booming… When, if not now, can public employees share in these positive developments?” asked Bsirske.

Short warning strikes are traditionally used as the opening shot in wage disputes with employers in Germany, before unions resort to staging stronger industrial action.

Talks with employers are due to resume on April 15th, according to Verdi.

They had also gone into talks demanding a six-percent wage boost.

German wage negotiations are under close scrutiny from eurozone central bankers, as they could help drive up inflation in the 19-nation single currency zone towards the European Central Bank's target of just below 2.0 percent.