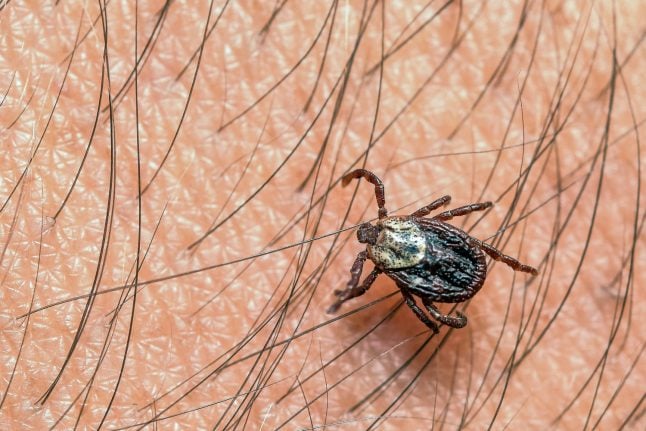 The number of tick bites in Germany fluctuates between 250-500 each year. Photo: DPA

A good 85 percent of incidents occurred in southern Germany, mainly around Bavaria and Baden-Württemberg, researchers announced on Tuesday at the Southern German Tick Congress in Stuttgart. Yet there were also isolated cases reported in the north, from private Berlin gardens to city parks in Mecklenburg-Western Pomerania.

TBE, which can lead to meningitis, is typically transmitted to humans through tick bites. For every 100 people who are bitten by an infected tick, about 30 percent contract the disease, according to researchers. In Germany, the number of cases per year has fluctuated between 250 and 500.

TBE can lead to inflammation in the brain and is occasionally fatal.

It is unusual that while there were fewer ticks overall in Germany in 2017, there were more tick-borne viruses, according to researchers. Last year 500 cases were recorded – the second highest number ever.

And while infected areas, typically no larger than a football field, can remain full of ticks for years, the ticks transmitting the virus can also disappear from one year to the next.

“We have a dynamic which we don’t understand,” Gerhard Dobler, head of the German Conservatory for TBE, told DPA. Along with other experts, Dobler attended the Southern German Tick Congress at Stuttgart's University of Hohenheim which discussed the incidents on Tuesday.

Regionally there is a sharp fluctuation of the number of cases. In northern Bavaria, the number of incidents has dropped sharply, while it has risen strongly in the Alpine region.

One potential explanation for the high number of bites overall could be the weather: a wave of warmth occurred after a two-week cold spell in the summer. People enjoyed the sudden sunny days during the high season of the wood tick, after which an outbreak of TBE was reported.

Infected grazing animals could also play a role in spreading the sickness, researchers state. It was not until 2016 when such cases, which occurred twice when two people drank raw goat’s milk, were reported. In 2017, eight similar cases were reported.