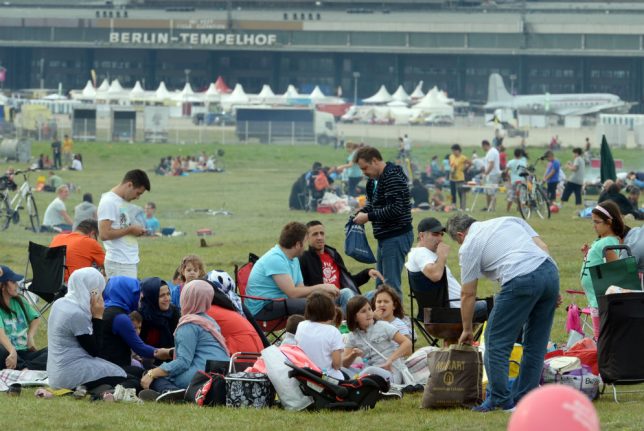 A diverse group of people at Tempelhofer Feld in Berlin. Photo: DPA

Latest figures compiled by the Federal Statistical Office (Destatis) show that by the end of 2016, Germany had its highest ever population of foreigners (people who only hold a foreign passport) – 10 million people. This was a 23 percent increase compared to statistics from 2014.

The country’s largest immigrant group is from Turkey (1.5 million), followed by nationals of Poland, Syria, Italy and Romania.

Close to half of Germany’s foreign population – about 4.2 million people – come from within the European Union, according to the Central Register of Foreigners (AZR).

Meanwhile Destatis figures indicate that the arrival of foreigners from non-EU countries has increased by almost 30 percent since the beginning of 2015.

Which federal state has the most (and least) foreigners?

Similar to the past ten years, latest data show that most foreigners live in the state of North Rhine-Westphalia (2.5 million) – not surprising as the Ruhr-Rhine region in NRW is Germany's largest urban area. In second place in terms of its foreign population is Bavaria and in third place comes Baden-Württemberg.

The smallest numbers of non-Germans are found in the eastern states of Thuringia (91,300) and Mecklenburg-Western Pomerania (69,000).

In the majority of Germany's 16 federal states, Destatis statistics from December 2016 indicate that the largest groups of foreigners whose native language is English are Americans and Brits followed by Canadians and Australians. Conversely, the smallest groups of native English-speaking foreigners across most states are Irish and New Zealanders.

The state with the largest number of native English-speaking foreigners is Bavaria (52,445). NRW (47,430) comes in second place and in third place Berlin (39,505), followed by the states of Baden-Württemberg and Lower Saxony.

Meanwhile the states with the fewest Anglophones are Thuringia (1,130), Saxony Anhalt (1,100) and finally Mecklenburg Western-Pomerania with only 945 native English speakers.

SEE ALSO: Expats still like Germany for the money, but still not fond of the locals

Much like the country as a whole, the city state of Berlin has been attracting more and more newcomers.

About 18 percent of the capital's population consists of non-German nationals, according to the statistical office for Berlin-Brandenburg. By the end of last year, 711,282 foreigners lived in Berlin. In June 2016, this figure was 658,274.

This strong growth is likely due to the arrival of many refugees in the past few years, reported Berliner Zeitung. More than one million people have sought asylum nationwide since 2015.

Home to citizens from at least 200 different nations, Berlin is also the most multicultural city in Germany. Even the island states of Palau, Kiribati and São Tomé are represented in the metropolis.

The single largest Turkish community outside of Turkey resides specifically in Berlin and Brandenburg.

The largest groups of Vietnamese and African people as well as significant groups of Brits and Canadians in the country can also be found in the capital. On Facebook a closed group called Canadians in Berlin has over 1,100 members.

Of more than 100,000 British people living across the Bundesrepublik, 14,931 were registered in the capital at the end of last year – a 79 percent increase in the population of Brits since the year 2000.

READ ALSO: Why are so many Brits coming to Berlin and what are the issues they face?

A strong presence of American nationals exists in the Rhineland-Palatine city of Kaiserslautern and its surrounding area. The Kaiserslautern Military Community, home to around 54,000 people, including military service members, is the largest American armed forces community outside of the US.

An American election party in Kaiserlautern in 2008. Photo: DPA

Here the culture of the US has been heavily adopted in society: menus in restaurants are often both in English and in German and employees in shops are frequently bilingual.

Another large American diaspora in Germany exists in Berlin (18,600), followed by Darmstadt (13,000). There are further US military communities in the southwest of the country, such as in Wiesbaden and Stuttgart.

SEE ALSO: Number of Americans choosing to be German doubles since 2009

Chinese and Indian people in Germany

Nationals of China and India account for a large chunk of Germany's non-European population.

Chinese and Indian communites exist in major cities such as Munich, Berlin and Hamburg. Additional regions with a significant number of Chinese people are Frankfurt and the Ruhr Valley. In Frankfurt about 80,000 people come from outside the borders of the Bundesrepublik.

Over the past ten years, the number of Chinese people living in Germany has risen sharply to a current figure of 120,000, according to Destatis. And more of them are coming to Germany to study, as they now comprise the largest group of foreign students at German universities.

There were over 32,000 Chinese students in Germany by the end of 2016, according to a new report from the ICEF Monitor, or almost 13 percent of foreign students. Students from Asia make up one-third of the over 340,000 students from abroad in Germany.