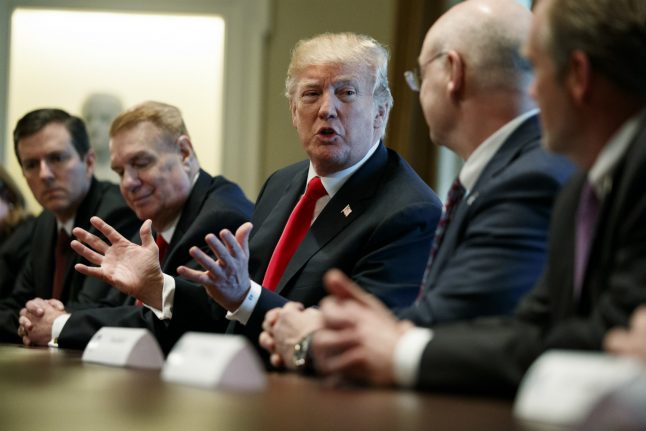 “I don't want to judge how close to or far from a trade war we are. Such a trade war would not be in German, European or American interests,” Chancellor Angela Merkel's spokesman Steffen Seibert told reporters in Berlin.

However, “closing oneself off and protectionism are the wrong path,” Seibert added, after President Donald Trump at the weekend threatened to impose tariffs on car imports from the European Union.

Last week Brussels raised the spectre of a tit-for-tat trade war with the US, saying it would slap a border tax on items like motorcycles, orange juice and jeans if Trump went ahead with a promised tariff on steel and aluminium imports into the US.

If the European Commission implements the plans, “we will simply apply a tax on their cars which freely pour into the US,” Trump tweeted Saturday.

The fresh threat followed the president's Friday declaration that “trade wars are good, and easy to win” in response to the initial uproar at his plans for a metals tariff.

Along with close partner France, other EU capitals and the Commission, Berlin will “watch very closely what the US government implements this week and then evaluate the correct reaction,” Seibert said.

“We will defend open markets, free markets,” he added.

Cars are Germany's largest industrial sector, employing roughly 800,000 people across the country and many thousands more around the world – including at major factories on US soil, where many vehicles for the American market are produced.