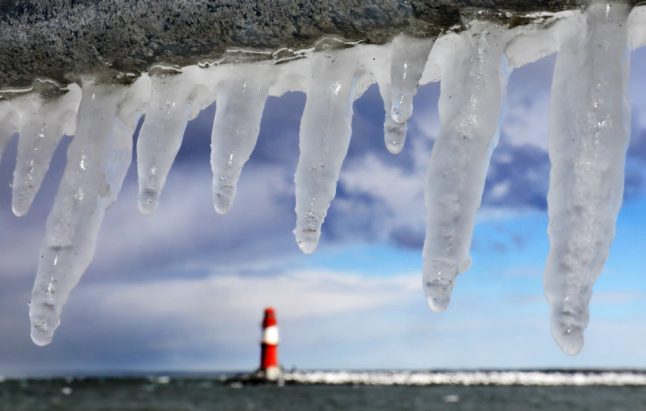 Icy conditions in Warnemünde by the Baltic Sea on Monday. Photo: DPA

In the small town of Barth along the Baltic Sea, the mercury reached a bitterly cold -17.5C late in the evening on Thursday, according to weather service Kachelmannwetter.

On the other hand, the west and south of the country are starting to see milder temperatures. The mercury in Saarbrücken, the capital of Saarland, went up to -1.4C. Meanwhile in Bonn it was -4C and in Berlin it was -12C.

On Friday the German Weather Service (DWD) predicts maximum temperatures of between -2C and 3C in the west and the south – not quite as cold as the previous days. But in the north it will remain frosty with highs of between -7C and 0C.

Many lakes across the country are frozen over due to the cold spell. A German Lifeguard Service (DLRG) spokesperson advises outdoor ice rink enthusiasts to go out in pairs as accidents have already occurred in the past few days.

In spite of the subzero temperatures, the streets have largely remained clear. “We haven’t have any special operations having to do with the weather,” said a spokesman for the fire department in Stuttgart.

“It's cold, but not slippery,” a spokesperson in Hamburg added, referring to the roadways in the Hanseatic city.

According to the DWD, a low pressure area will cause temperatures to rise in the next few days, meaning that the peak of Germany’s cold spell is forecast to finally let up around the weekend.

In the northern half of the country temperatures on Saturday are predicted to range between -5C and zero. A mixture of snow and freezing rain is expected to fall in the southwest, but by the Baltic Sea it will remain relatively dry, the DWD reports.

By Sunday the south of the country is forecast to be basking in temperatures of up to 11 degrees. The DWD predicted temperatures as high as 5C in the northeast part of the country. Yet weather.com was slightly more optimistic, forecasting a high of 6C.