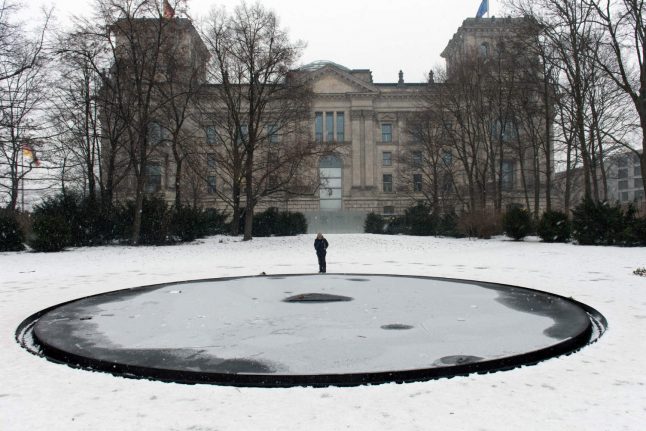 The memorial to Roma and Sinti victims of Nazism in Berlin. Photo: DPA

The ancestors of Silas Kropf were deemed racially inferior by the Nazi regime, and at least 35 of them were captured by SS soldiers and deported to concentration camps. His great grandparents and grandfather, who lived in a village near Frankfurt, spent years in hiding to evade deportation. The 23-year old Kropf, who is currently studying at Frankfurt University, was born four decades after the fall of the Nazi regime, but his life has nonetheless been shaped by his family’s Holocaust experience.

“Since the very beginning of my childhood, I was always told by my mother we have to hide that we are part of the minority,” Kropf said.

Kropf is part of the German Sinti and Roma minority, who in English are frequently called “Gypsies”, a term many consider insulting. The people of this stateless minority emigrated from the Indian sub-continent around 1,000 years ago and settled in many European societies.

Today there are an estimated 70,000 to 100,000 German citizens who identify as Roma or Sinti. This minority would have been much larger if not for the systematic killings that began exactly 75 years ago, on February 26th 1943, when the so-called “Gypsy Camp” in Auschwitz was opened.

Some 23,000 German Roma and Sinti were deported to Auschwitz and at least 19,000 died there, while thousands of others were sent to concentration camps inside Germany. In Kropf’s family, only six people survived the Nazi camps. He grew up hearing stories about close and distant family members who were murdered or forced to live undercover. But in secondary school, when he learned about the victims of Nazism, his people were barely mentioned in the class textbook.

“There was a large chapter about the persecution of the Jews,” Kropf recalled, “and at the end of that chapter, there was a small sentence saying that around 500,000 Sinti and Roma [from the whole of Europe] had been killed during the war.”

The belittling of the Sinti and Roma genocide started immediately after the fall of the Nazi regime, according to Dr. Karola Fings, an historian and author of the book “Sinti and Roma: History of a Minority”. While Jewish victims were summoned to share their testimonies in the Nuremberg trials and were being recognized as Nazi victims, the authorities in West Germany insisted the so-called Gypsies were imprisoned for criminalities and refused to acknowledge that a racially motivated genocide of this minority took place.

Dr. Fings explained that before Nazism, most Sinti and Roma people in Germany were assimilated in society and had stable income and homes. But after Nazism, the Sinti and Roma survivors –who had lost many family members as well as all of their properties – often had nowhere to go.

“When they came back to the cities where they used to live, they were not welcomed, so it was very hard for them to establish a new life in Germany,” said Dr. Fings. “The society was not open to letting them be regular German citizens. They tried to push [Roma people] to the outskirts of the cities.” Recognized yet discriminated against

The German Sinti and Roma community slowly rebuilt itself in the second half of the 20th century. Sinti and Roma survivors and activists’ decades-long struggle for recognition as Nazi victims and for civil rights – which began in the 1950’s and included protest marches and hunger strikes – is visualized in a permanent exhibition at the Documentation and Cultural Center of German Sinti and Roma in Berlin and in Heidelberg. The struggle culminated in March 1982, when Germany’s Chancellor Helmut Schmidt publicly recognized that the Nazis persecuted Sinti and Roma people for racial reasons.

Thirty years later, Chancellor Angela Merkel unveiled a memorial for Roma victims of Nazism – erected at the heart of Berlin, beside the Reichstag. The memorial consists of a dark, circular pool of water with a triangular stone at its centre, referencing the inverted triangular badges that Sinti and Roma were forced to wear in concentration camps. In the memorial’s entrance are information boards detailing a chronology of the murder of hundreds of thousands of Sinti and Roma.

This open-air memorial attracts many visitors everyday due to its prime location and raises the awareness of Germans and tourists to the Sinti and Roma genocide. But as Chancellor Merkel acknowledged in her speech as she unveiled the memorial in October 2012, the German Sinti and Roma continue to suffer from discrimination and exclusion.

A 2014 survey by the Federal Anti-Discrimination Agency on German people’s attitudes towards Sinti and Roma detected that “derogatory stereotypes and the existence of prejudice can be found in all segments of the population.” In 2016, a study by the Pew Research Center examining the German’s public opinion of minorities revealed there are more unfavourable views towards Sinti and Roma than any other minority group, while research by the Friedrich Ebert Foundation showed that about 25 percent of the German population is hostile towards Sinti and Roma people. It is because of these racist views that Silas Kropf’s mother urged him to hide the fact that he is part of the minority. Kropf, who lives in the Frankfurt suburb of Hanau, said he knows many other members of his minority – of all ages – who conceal their ethnicity and cultural identity because they are scared of being mistreated or discriminated against. But he has chosen a different path. Kropf has become an outspoken activist on Sinti and Roma issues. He volunteers for Amaro Drom, a youth-led German Sinti-Roma association, and conducts workshops and lectures to teach young German people about the history of his minority and the impacts of anti-Gypsyism.

The 42-year old Reinhardt, who grew up in Ravensburg, is also the author of two books: one about her family’s history and another about perceptions of her minority in pop culture. She regularly tours through different German cities, where she presents an evening event that includes singing, reading chapters from her books and answering people’s questions.

Reinhardt told The Local her goal is to “try to replace the wrong pictures that people have in their mind” about her minority. She tries to highlight how Sinti and Roma have a role in Germany’s history and culture, so that her fellow citizens comprehend this fact. She wants “to show them not only that we have survived, but [that] it is also our country.”