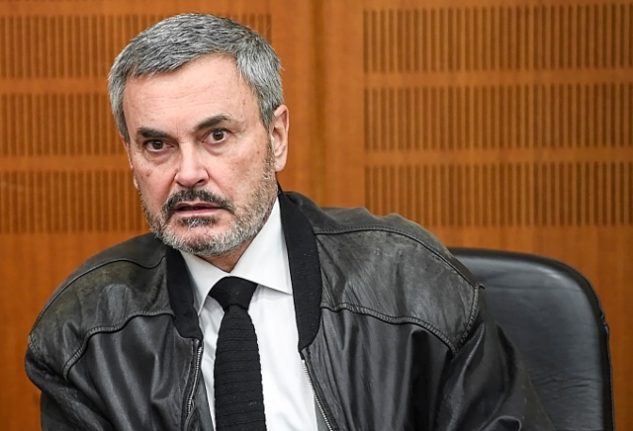 He had already received a life prison term in Sweden for a six-month shooting spree in 1991-92 in which he killed an Iranian student and wounded 10 other immigrants.

The convict was extradited to Germany in late 2016 to face trial in one additional murder, of 68-year-old Zmigrod in Frankfurt in 1992.

The guilty verdict for Ausonius, who had denied the woman's murder, was announced at around 2.30pm.

Born as Wolfgang Alexander Zaugg in Sweden to a German mother and a Swiss father, he was reportedly bullied at school, rejected his foreign origins and later developed a strong hatred for immigrants.

He would dye his dark hair a lighter shade and wear blue contact lenses to appear like a “real Swede”, Frankfurter Allgemeine Zeitung has reported.

He obtained Swedish citizenship as a young adult and changed his name twice, finally to Ausonius after a Roman poet.

Norwegian mass murdered Anders Behring Breivik, speaking at his Oslo trial for the 2011 killings of 77 people, mentioned the 'Lasermannen' or 'laser man' as a figure who shared the same goals.

Ausonius, diagnosed with a personality disorder, variously worked odd jobs, studied chemistry, served in the military, lived on the streets, grew wealthy by trading stocks and bonds and plunged back into homelessness.

Displaying a pattern of antisocial behaviour and violent outbursts, he went on to commit a string of bank robberies.

His spate of racist gun attacks started when he fired at a 27-year-old Eritrean student in August 1991, wounding him.

Ausonius later killed the 34-year-old Iranian Jimmy Ranjbar with a shot to the head and badly wounded another nine victims, from countries including Brazil, Greece, Syria and Zimbabwe, in his shooting spree, which went on until January 1992.

The German court found that he committed the Frankfurt murder in February 1992 – months before he was arrested in June back in Stockholm after another bank robbery.

Zmigrod was born in Poland, survived several Nazi concentration camps including Auschwitz, and later lived in Israel before moving to Germany in 1960, according to a Swedish documentary.

German prosecutors said Ausonius had been seen arguing with the woman, a hotel restaurant wardrobe attendant, 36 hours before her death, accusing her of having stolen his Casio electronic device.

They charged that he killed her near her home and took her handbag in the apparent belief it contained the device on which he had stored numbers of his foreign bank accounts.

Ausonius was jailed for life in Sweden in 1995 over the series of attacks and robberies in Stockholm and Uppsala.