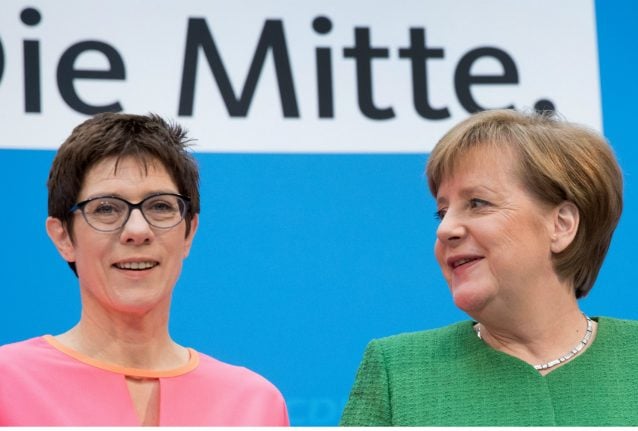 Angela Merkel on Monday tapped the popular female premier of Germany's tiny Saarland state to take over as secretary general of her conservative party, fuelling speculation the veteran chancellor is lining up her successor.

At a joint Berlin press conference, Merkel said she was “moved” that close confidante Annegret Kramp-Karrenbauer, 55, would take the reins from her right-hand man Peter Tauber at “a difficult time” for their Christian Democratic Union (CDU) party.

The surprise reshuffle comes after Tauber said at the weekend he was stepping down for health reasons, and with Merkel struggling to form a new government after a tricky general election last September.

The chancellor praised Kramp-Karrenbauer, known as AKK, as someone “who has experience and knows her own mind, whose work I have valued for years”.

Both women were coy however about whether the move meant Merkel had effectively anointed AKK as her heir apparent.

“I would not give myself that label,” Kramp-Karrenbauer told reporters.    Merkel also refused to make predictions for the future, saying only she wanted to see the state premier “fully unfold her skills and capabilities in the new role”.

Kramp-Karrenbauer, dubbed the “Merkel of Saarland” and “mini-Merkel” by German media, is expected to be formally appointed at a CDU congress on February 26.

Her star been on the rise since her thumping re-election last year in a closely-watched regional vote. She also played a key role in Merkel's tough coalition negotiations with the centre-left Social Democrats.

“Merkel and Kramp-Karrenbauer are sending the first clear signal in the debate about Merkel's succession in four years' time at the latest,” the Sueddeutsche Zeitung wrote.

The changeover comes as Merkel, in power for over 12 years, is under fire within her party over concessions made to seal another loveless “grand coalition” with the Social Democrats (SPD) — and the loss of the powerful

By appointing the up-and-coming AKK to a top CDU role, Merkel is in part responding to critics who have been calling for fresh faces to reinvigorate the party after its disappointing showing in September's general election.

AKK said she would give up the Saarland premiership she has held since 2011.

As the CDU's new secretary-general, Kramp-Karrenbauer would be following in the footsteps of Merkel who held the position from 1998 to 2000 before becoming chancellor in 2005.

AKK is described as a pragmatic and unpretentious politician seen as a safe choice to preserve Merkel's legacy.

But “to interpret her as a simple copy of Merkel would be a misunderstanding,” Die Welt newspaper commented.

A staunch Catholic, AKK could also appeal to the more conservative wing of the CDU, which has accused Merkel of undermining the party's traditional values.

A mother-of-three who has been a mainstay in local politics for over three decades, AKK has climbed steadily up the ranks.

“There's not a task you can't trust Annegret with,” the CDU's then-Saarland premier Peter Mueller said in 2000 when AKK became Germany's first woman to be named state interior minister.

Kramp-Karrenbauer first caught the national spotlight last March, when she stormed to victory in a state poll seen as a test of Germans' mood just months ahead of September's nationwide polls.

After new SPD leader Martin Schulz appeared to pose a real challenge to Merkel in early 2017, AKK's effortless re-election was taken as the first sign that the CDU had nothing to fear.

Merkel herself presented AKK with a bouquet of flowers after voters returned the state premier to power with 41 percent of the vote.

For Schulz, it marked the beginning of a downward spiral that saw him lead the SPD to its worst score in decades in the general election.

He stepped down as SPD chief last week, just days after he clinched the coalition agreement with Merkel that has divided the centre-left party.

The hard-fought coalition pact must now be approved by the SPD's 460,000 members, with the result of the postal ballot expected on March 4.

The outcome is considered wide open as the SPD's youth and left wings are fiercely opposed to another term governing in Merkel's shadow.