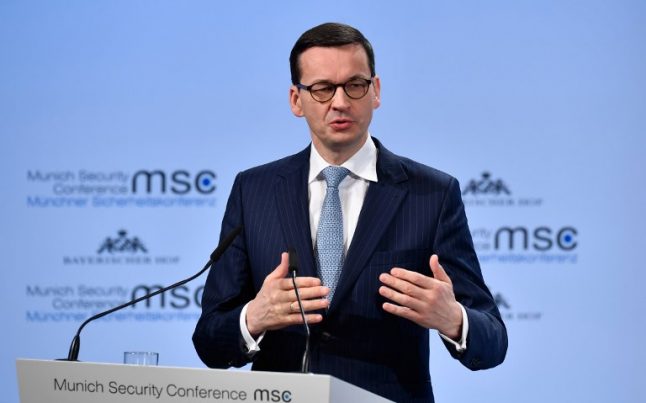 Polish PM Mateusz Morawiecki gives a speech during the Munich Security Conference on Saturday. Photo: Thomas Kienzle / AFP
The Israeli leader, who like Morawiecki was in Munich for a global security conference, in a statement condemned “an inability to understand history and a lack of sensitivity to the tragedy of our people”.
“The Polish Prime Minister's remarks here in Munich are outrageous,” he said, adding that he intended to speak to Morawiecki “forthwith” about the matter.
SEE ALSO: May uses Munich speech to plead for 'urgent' post-Brexit EU security deal
Morawiecki's claim about the Holocaust's perpetrators came amid an unprecedented diplomatic row with Israel sparked by a controversial law passed by Poland's senate this month. The law sets fines or a maximum three-year jail term for anyone ascribing “responsibility or co-responsibility to the Polish nation or state for crimes committed by the German Third Reich”.
'Unbelievable'
Appearing at the Munich Security Conference, Morawiecki was questioned by a journalist who told of his mother's narrow escape from the Gestapo in Poland after learning that neighbours were planning to denounce them. The journalist, Ronen Bergman, asked if by recounting this, “I am a criminal in your country?” — garnering a round of applause from the audience.
Morawiecki responded: “It's not going to punishable, not going to be seen as criminal, to say that there were Polish perpetrators, as there were Jewish perpetrators, as there were Russian perpetrators, as there were Ukraine and German perpetrators.”

He reiterated that the point of the law was to defend Poland's honour by making clear that people knew “there were no Polish death camps… There were German Nazi death camps.”
“But we cannot agree with mixing perpetrators with victims, because it would be first of all an offence to all the Jews and all the Poles who suffered greatly during the Second World War.”
Several attendees later took to Twitter to assail the remarks.
Bergman himself tweeted that the Polish premier's answer was “unbelievable”.

Francois Heisbourg, a London-based diplomacy expert, called the reference to “'Polish perpetrators like there were Jewish perpetrators'” a “shameful response”.
Noa Landau, a correspondent for the Israeli daily Haaretz, denounced an “outrageous scene”, noting the audience's silence after Morawiecki's comments.