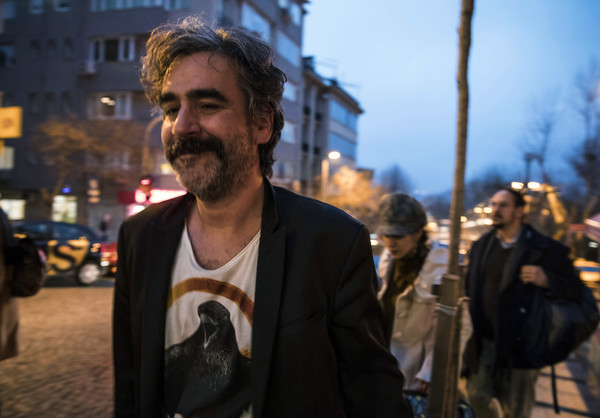 Deniz Yücel. Photo: DPA
Deniz Yücel, 44, the Turkey-based correspondent of Die Welt newspaper, landed in Berlin on Friday night hours after being released from a high security prison in Istanbul.
In a video posted on social media during the night Yücel said: “The funny thing is that I still do not know why I was jailed for a year, why I was held hostage for a year.”
Yücel, who has both German and Turkish citizenship, had been accused of writing propaganda in support of terrorism. He is among more than 100 journalists and writers to be detained in Turkey since the failed July 2016 coup against President Recep Tayyip Erdogan.
On Friday, prosecutors presented an indictment seeking up to 18 years in jail for Yücel on charges of “making terror propaganda” and “inciting public hatred and hostility”, but he left the country.
In the video, Yücel also highlighted the plight of other journalists jailed in Turkey, saying they had “done nothing but their job”.

Worth sharing this again: @Besser_Deniz on his imprisonment & release. As he was leaving prison he was handed a document dated 13 Feb that stated that ‘his imprisonment continues’ (!) ‘Neither my imprisonment nor my release has anything to do w/ law’ pic.twitter.com/qxtHrmfnO6

On Friday, an Istanbul court also jailed three prominent Turkish journalists for life on charges of links to the group blamed for the failed coup.
Amnesty International said their sentencing had “drained the joy from
celebrations” over Yücel's release.
“I do not know why I was released today,” said Yucel in the video. “Of course I rejoice (my freedom) but there is a bitter aftertaste.”
Yücel's surprise release may help repair severely-eroded ties between Ankara and Berlin.
However a number of German citizens or dual nationals — who are seen by Berlin as political hostages — remain in Turkish prisons, among the more than 55,000 people arrested since the failed coup.