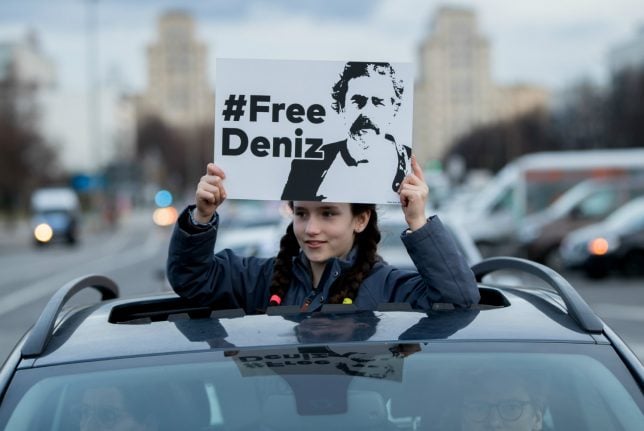 German politicians called on Turkey on Wednesday to free Yücel, saying that relations between the two countries could not be normalized as long as he remained in prison.

“It is unthinkable that relations between German and Turkey will be normalized as long as a legal process and the freeing of Yücel do not take place,” said Michael Roth (SPD), state secretary in the Foreign Ministry.

Roth added that it was incomprehensible that Yücel was still being held even though he had not been charged with a crime.

Manfred Weber of the Christian Social Union called for an end to talks for Turkey to join the EU.

“Denis Yücel has been sitting in a Turkish prison for exactly a year. That is an unacceptable situation,” he said.

Roderich Kiesewetter, a member of Angela Merkel’s CDU, said that Turkey was detaining Yücel as a form of blackmail.

“First and foremost the Turkish government is using his imprisonment as a weapon to blackmail Germany in other areas such as over the deportation of alleged terrorists and people involved in the attempted putsch against Erdogan,” he said.

On Wednesday Turkish Prime Minister Binali Yildirim suggested that the case could soon be resolved.

“I hope that he will soon be released. It is my opinion that there will soon be movement,” he said, before adding that the decision was for the Turkish justice system to make, not the government.

Yildrim will arrive in Berlin on Thursday for a meeting with Chancellor Angela Merkel.

Yücel, from the small town of Flörsheim am Main in Hesse, is the son of Turkish immigrants and holds dual Turkish and German citizenship.

After working as an editor for many years at the left-wing taz newspaper, he became Turkey correspondent for Die Welt in 2015.

The Turkish government has alleged that he was involved in spreading the propaganda of Kurdish terrorist organizations. But he has never been charged with a specific crime.

Many German newspapers marked Yucel's first full year in custody without charge with front page stories Wednesday, when the #FreeDeniz campaign was planning a major solidarity event in Berlin, including a noisy car convoy.

Yucel, 44, appearing unbowed by his time behind bars, has secretly written a book entitled “We're Not Here for Fun” which was to be launched at a star-studded reading in the German capital on Wednesday evening.

Yucel gave himself up to police on February 14, 2017 after initially taking refuge inside a German diplomatic compound in Istanbul when media reported an arrest warrant had been issued against him. He has been in custody ever since.

Die Welt reacted to Yildirim's stated hope that Yucel would soon be released from custody, with a journalist commenting that “here we really have something in common”.