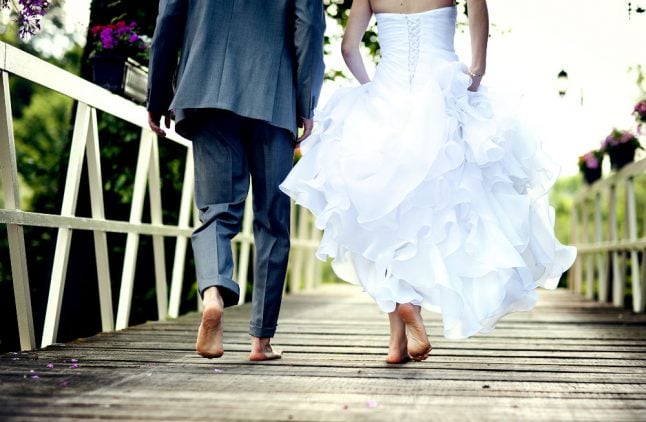 The key thing to know about getting hitched in Germany is that only those who wed before civil registrars can be considered legally married.

But while civil weddings often take place in either registry offices or churches, there's no reason why you can't have your special day elsewhere as some German registry offices have special branches in castles, lighthouses and open-air museums.

Here's our round-up of the most lovey-dovey places across the country to say 'I do.'

Only a small moated castle was located on the site of the Schwetzingen Palace back in 1350. Hundreds of years later, the Baden-Württemberg palace – not far from Heidelberg – became the summer residence of royal figures in the Palatinate of the Rhine.

Nowadays from spring to autumn “you can’t move without bumping into a bride getting her photos taken” here, travel blogger Erin McGann told The Local.

Stil, McGann recommends it for a reason: “It looks like a corner of Versailles.”

A view of Schwetzingen Palace and Gardens from above. Photo: DPA

In front of the palace are picturesque gardens scattered with over 100 sculptures, which, according to the attraction's website, “are a cultural heritage site of European significance.”

The grounds moreover cater to lovebirds in that they “offer plenty of choice when it comes to saying ‘I do’ in a royal atmosphere.”

SEE ALSO: Here's how to marry a German as an expat

2. In the Bavarian Alps near Tegernsee

If you want nothing more than to tie the knot with the mountains as a backdrop, the resort town of Tegernsee, south of Munich might just be the ticket.

For Forrest and Andrew, eloping in the hills was a dream come true.

“We didn’t want the extravagant cake or the expensive venue – we just wanted to have an intimate ceremony without the usual wedding stresses,” Forrest told Fly Away Bride, a website that features weddings in Europe.

“It was the most bizarre and amazing feeling to be able to just look at the panoramic view and try to take in every moment,” she added.

Surrounding the town of Tegernsee is a forested valley amidst the Bavarian Alps, where there are plenty of activities for lovebirds to indulge in after the official ceremony, such as hiking or skiing. Just south of the town on Wallberg mountain, a tiny church called Wallbergkircherl offers particularly panoramic views of the valley below.

Thinking of a wedding that’s city chic but also relaxing and encompasses natural beauty? Why not consider cruising down Lake Alster in the Hanseatic city of Hamburg in a traditional steamer?

Whether you prefer romantic canals or unique panoramic views, at your wedding in one of these steamers you'll see Hamburg “from the most beautiful perspective,” the city's website writes.

What better way to celebrate the happiest day of your life than floating along the water with the magnificent port city in the distance while dancing ‘til the wee hours of the morning in the arms of your one and only?

A boat chugging away with Hamburg's city hall and the Elbphilharmonie in the distance. Photo: DPA

4. The Wiblingen Monastery in Ulm

Another one of travel blogger Erin McGann’s suggestions as one of the most romantic places to get married in Germany is a place “that sounds boring until you see it; it’s routinely on lists of places you need to see before you die.”

When McGann visited the Wiblingen Monastery in Ulm in January, she spotted a newly married couple having photos taken in its library and thought the bride – in a strapless dress – to be rather brave for doing so as the place was unheated.

The monastery’s website describes the library as “one of the finest examples of Rococo architecture” – at your disposal for a wedding ceremony or reception. Who wouldn’t want to get married in this “airy and whimsical” place?

The former Benedictine Abbey was founded in 1093. Only in 1714 did renovations and expansions on it take place, in which it turned into a “final masterpiece of Baroque architecture in Upper Swabia.”

This list wouldn’t be complete if it didn’t cater to those who may be a bit more traditional and prefer to state their vows in a church. And the Herzu-Jesu-Kirche is one of the most beautiful churches in Germany to do so. This Catholic church built in the Romanesque Revival architectural style in the early 1900s is a favourite among couples due to its “impressive appearance,” the church’s website states.

Located at an intersection where several roads converge and surrounded by a busy shopping area in the city centre of Koblenz, the church is sure to offer pause from the hustle and bustle and nothing but tranquility on your special day.

READ ALSO: 10 things you need to know before a German wedding
6. Märchenvilla in Eberswalde
Exactly as its name suggets (Märchen means fairy tale in German), the Märchenvilla in Eberswalde just north of Berlin promises to enchant. But here's the most surprising part: the Brandenburg-based villa has also been a civil registry office since 2004.
Designed in the classicist style, the so-called fairy tale mansion was built in 1834. From lovebirds looking to elope and have a private civil ceremony to those seeking a large celebration, the Märchenvilla is a foolproof choice.

Photo: Wikimedia Commons
In fact, many German cities in recent years have moved their registry offices to beautiful buildings (e.g. with high ceilings or stucco ornamentation) in the effort to create a more romantic atmosphere, according to a website for brides called Braut.de. The registry office in the North Rhine-Wesphalian city of Münster is a further example of this.
7. Pilsum Lighthouse on the North Sea coast
Need an invigorating and rustic way to ring in your marriage? Look no further. Along the North Sea coast there's a lighthouse that's not only one of the best-known symbols of East Frisia, but also a perfect spot to get hitched.
Built in 1889, the Pilsum Lighthouse guided ships through the channel at the northwestern tip of Germany until 1915. Nowadays it serves as a popular choice for weddings, where packages are on offer including everything from a wedding photographer to a horse and carriage.
A couple getting married at the Pilsum Lighthouse in 2004. Photo: DPA
8. Garden of the Senses in Merzig
Tucked away in one of Germany's smallest federal states, Saarland, is a collection of 11 open-air gardens that were created to literally trigger the senses. One of them for instance compels visitors to find their way through it in a hands-on way via touch.
For those looking to wed there's even the rose garden, which captivates with a variety of roses and colour-coordinated shrubs. Take note, though: civil ceremonies can only be booked here from May to September.
There's also enough room at the Garden of the Senses for large wedding parties, the site's website states.
The Garden of the Senses. Photo: DPA
READ ALSO: The 15 most romantic towns in Germany