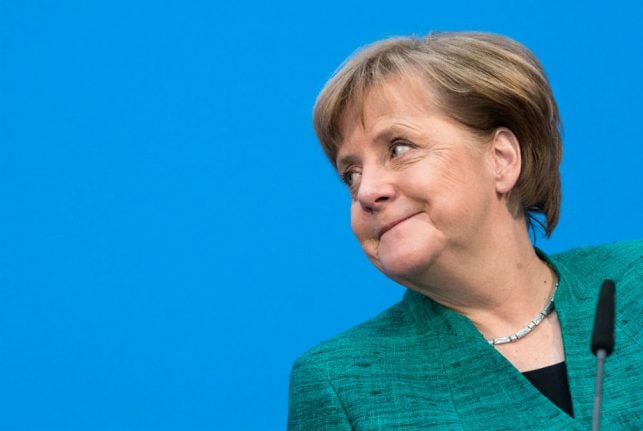 The veteran leader said that despite the sniping over a poor election result and the loss of key ministries in a fresh coalition deal, she felt no decline of her authority and wanted to stay at the helm of Europe's biggest economy until 2021.

“I understand the disappointment,” she said, but stressed that she “naturally” planned to stick with her pledge to stay on for four years as chancellor and party chief rather than make way for a successor before the end of the term.

“I am a person who keeps what they have promised,”Merkel, who is head of the Christian Democratic Union (CDU), told public broadcaster ZDF.

The 63-year-old won September elections but fell short of a clear majority, in large part due to the rise of the far-right, anti-immigration AfD which took votes away from all major parties.

After a gruelling marathon of negotiations, she managed on Wednesday to forge another “grand coalition” deal with the centre-left Social Democrats (SPD), who however extracted a high price.

The SPD snatched the powerful finance, foreign and labour ministries, as well as the justice and environment portfolios, while Merkel's Bavarian allies the CSU took the interior ministry.

News weekly Der Spiegel in a cover illustration showed a nude Merkel, with gleeful SPD figures running off with her clothes.

Merkel, after more than 12 years in power in which she became Europe's go-to leader, is now widely held to be in the twilight phase of her political tenure, although she has not yet been openly challenged.

“The transition to the post-Merkel era has begun,” judged the Sueddeutsche Zeitung daily, which added that Merkel's power was waning and “a dangerous mood” was starting to spread within her CDU.

Handing over the finance ministry — long the domain of Merkel lieutenant and fiscal hawk Wolfgang Schäuble — “was one concession too many,” fumed lawmaker Wolfgang Bosbach, reflecting a widely held view in the conservative party.

An ambitious rival of Merkel, Jens Spahn, also charged that losing direct control of the public purse strings was a “hard blow” that “hurt” the CDU, speaking to Austrian newspaper Presse am Sonntag.

CDU youth wing leader Paul Ziemiak also charged that “the mood at the base is worse than bad”, with “no signs of real renewal” in Merkel's reported new line-up, speaking to newspaper Bild am Sonntag.

Conservative lawmaker Christean Wagner even suggested that, after the party's “electoral disaster”, its leader should “think about a successor”, while bemoaning that the touchy issue was not being openly discussed.

Facing the growing unrest from within her long-obedient CDU, Merkel chose to defend the coalition deal head-on in the TV interview.

Losing the finance ministry was “painful”, she conceded, but she stressed that the move was “acceptable”, since the alternative would have been a breakdown in talks, and likely snap elections.

In a nod to party critics who want to see a new generation enter the top ranks, she said that her next cabinet should not only include “the over-60-year-old but also younger” conservative politicians and cover “the full breadth” of opinion in the CDU.

Within the demoralised SPD, an even more dramatic feud has broken out into the open — between election loser Martin Schulz and his former ally turned rival Sigmar Gabriel.

Schulz on Wednesday renounced the party leadership to snatch the foreign minister's post from Gabriel, then, after an outcry, gave up the top diplomat's post too. Both men may now watch the next government from the backbenches.

The hard-fought coalition deal is still subject to a ballot by the SPD's deeply divided base of 470,000 rank-and file members, who could yet sink the unpopular power pact.