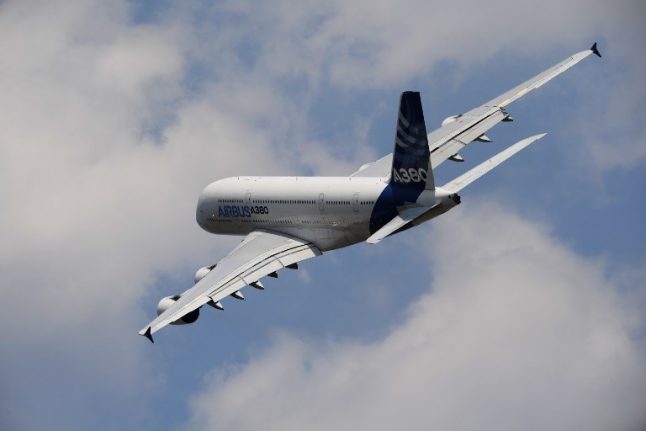 2017 file photo of an Airbus A380. PHOTO: CHRISTOPHE ARCHAMBAULT / AFP
Prosecutors in Munich said in a statement that their investigation did not find evidence of bribery to secure the lucrative contract. But they said Airbus management had failed in its supervisory duty by allowing employees to make multi million-euro payments linked to the deal for “unclear purposes”.
The firm said in its own statement it had accepted the fine, meaning that the probe first opened in 2012 “has been terminated”. But its legal woes are far from over. Authorities in Austria are still investigating whether bribes were paid to land the €2 billion sale of 18 Eurofighter jets to Vienna. And the Austrian government last year launched a lawsuit against the company, seeking up to €1.1 billion in damages over the Eurofighter purchases.
It accuses Airbus, previously called EADS, of deliberately hoodwinking Vienna over the order, overcharging it to make up for kickbacks and other shady expenses linked to winning the contract. Current Airbus chief Tom Enders was head of the EADS defence division that negotiated the contract at the time.
The corruption probes in Germany and Austria, as well separate graft investigations in Britain and France, have long cast a pall over one of Europe's most successful and best known companies.
Airbus announced in December that embattled Enders would not seek reappointment when his current term ends in April 2019.
'Major efforts' to do better
The Eurofighter Typhoon is a major prestige product for the European defence industry, with some 500 aircraft delivered
so far to Germany, Britain, Italy and Spain, as well as to Austria and Saudi Arabia.
The four founding nations in the consortium — Germany, Spain, Britain and Italy — all use the planes in their own air forces. Other contracts have been signed with Oman and Kuwait. Austria was the first country outside the consortium to sign up.
But allegations of graft soon began swirling around the deal. A first probe was set up in Austria in 2007 and led to the suspension of the then air force chief following revelations that his wife's company had been paid 87,600 euros by a lobbyist.
In 2012, Austrian and German authorities then launched probes to investigate whether officials had been paid millions of euros through advisory firms to secure the contract.
A spokesman for the prosecutor's office in Vienna told Austria's APA news agency that it could not yet say when its investigation would be completed.
The prosecutors in Germany meanwhile said Airbus had fully cooperated with their probe and had improved its internal controls since 2012, “which is why there is reason to believe such events could not happen again”.
Airbus also said it had made “major efforts” to bolster its compliance procedures.
Separately, Britain's Serious Fraud Office and French prosecutors are investigating Airbus for suspected corruption in its UK-based civil aviation arm.
The probes were opened last year after Airbus raised suspicions itself over irregular transactions.
Airbus has since warned that the British and French investigations into possibly irregular payments via middlemen could have a “material impact” on its profits and businesses.
By AFP's Michelle Fitzpatrick
Url copied to clipboard!