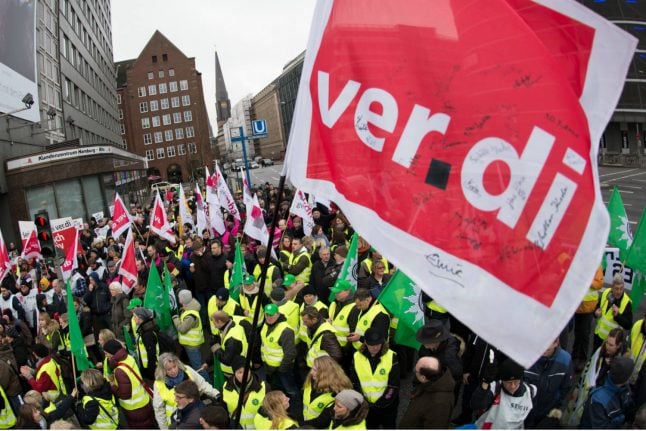 Some 2.3 million public employees should get a pay rise of six percent or at least 200 euros ($245) per month over the coming year, unions Verdi, GEW and DBB said.

Any protracted dispute with politicians could disrupt life in Germany, as in 2016 when rubbish collection, daycare, hospitals and transport were hit by “warning strikes”.

“We've seen continuous increases in tax revenue for years. Public sector workers should get a share of that, all the more so because there is a gap to make up with the average increase in salary” across the economy, said Frank Bsirske, leader of the Verdi union.

Germany's budget surplus, which hit 38.4 billion euros last year, is forecast to climb this year and in 2019.

Civil servants' talks with the interior ministry will begin in Potsdam, near Berlin, on February 26.

The ambitious goal follows soon after metalworkers' union IG Metall secured a 4.3 percent pay rise, additional one-off payments and the right to temporarily switch to a shorter working week for millions in the key economic sector.

They had also gone into talks demanding a six percent wages boost.

German wage negotiations are under close scrutiny from eurozone central bankers, as they could help drive up inflation in the 19-nation single currency zone towards the European Central Bank's target of just below 2.0 percent.