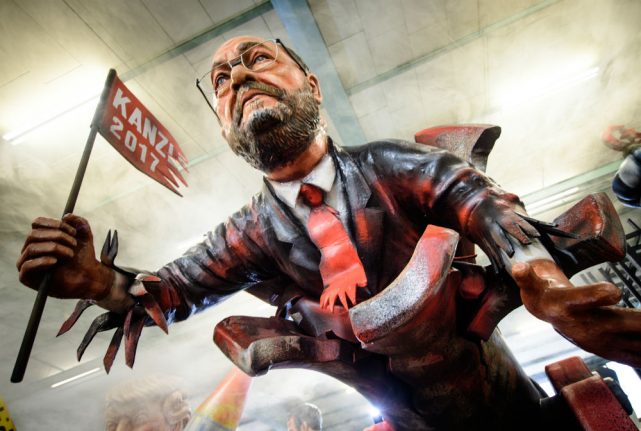 Hours after clinching a hard-fought coalition pact with Chancellor Angela Merkel's conservatives on Wednesday, Schulz declared he was not the right person to lead the “process of renewal” his beleaguered party needed.

“I have tried to give the party strength and courage, but I can't do justice to the expectations,” he said, tapping the SPD's parliamentary group leader Andrea Nahles as his replacement.

The former European Parliament chief said he now wants to serve as foreign minister in Merkel's next government, one of three crucial portfolios he managed to snatch for the SPD in the gruelling coalition talks.

But the renewed tie-up with Merkel's conservatives is far from guaranteed, as Schulz has promised to give the SPD's 460,000 members the final say on whether to approve the coalition deal.

The referendum could be tight as many grassroots SPD voters are still fuming that Schulz backtracked on his pledge to go into opposition after leading the party to a historic low of 20.5 percent in September's election.

“Schulz has made many promises he couldn't keep in recent months,” the Sueddeutsche Zeitung daily wrote, adding that he had “lost credibility”.

By setting his sights on the glamorous foreign ministry role, the 62-year-old appeared to be eyeing an elegant exit “from an increasingly precarious situation”, it added.

Down but not out

Some observers say Schulz's woes are not all his own doing.

After her attempt to forge an untried alliance with two smaller parties broke down in November, she pinned her hopes for a stable government on the SPD.

Faced with the alternative of snap polls that could further boost the AfD, Schulz caved in to pressure to reconsider for the good of the nation — despite initially categorically ruling out another term alongside Merkel.

But it's his sudden eagerness to take up a ministerial post that has most flummoxed supporters, contradicting his earlier insistence he would “not enter into a Merkel cabinet”.

“The first U-turn can be forgiven,” the regional Augsburger Allgemeine newspaper wrote.

“But if Schulz becomes minister, he would be breaking a personal promise.”

After riding high in the opinion polls when he first took the helm of the SPD last year and inspired a wave of new party memberships, support for Schulz has slumped to an all-time low.

The latest surveys suggest just 14 percent of Germans would want him as chancellor, while the SPD would score a record-low 17 percent if elections were hold now.

Schulz's downward trajectory prompted the Forsa polling institute to dub him “the loser of the year” in 2017.

But commentators warn against writing Schulz off too soon.

They have praised his tenacity in the coalition haggling, which saw the SPD win more concessions than many expected — including landing the heavy-weight foreign, finance and labour ministries.

If the SPD rank-and-file give the new government the thumbs up, some time trotting the globe as Germany's top diplomat could also give Schulz a chance to shine and show off the diplomatic skills honed during his time in Brussels' corridors of power.

“Schulz could be a lot happier in a few months,” the Sueddeutsche daily said.

Besides, Schulz is no stranger to overcoming adversity.

A high-school dropout who struggled with alcoholism, Schulz turned his life around and went on to open a book shop and become the youngest-ever mayor in the state of North Rhine-Westphalia.

He was elected to the European Parliament in 1994 and rose to become president of the EU's only elected body in 2012. Along the way, he taught himself five languages.

His struggles have shaped the man he is today, Schulz has said in the past.

“I believe I'm the only senior politician in Germany to openly admit my personal catastrophes,” he once told Der Spiegel weekly.