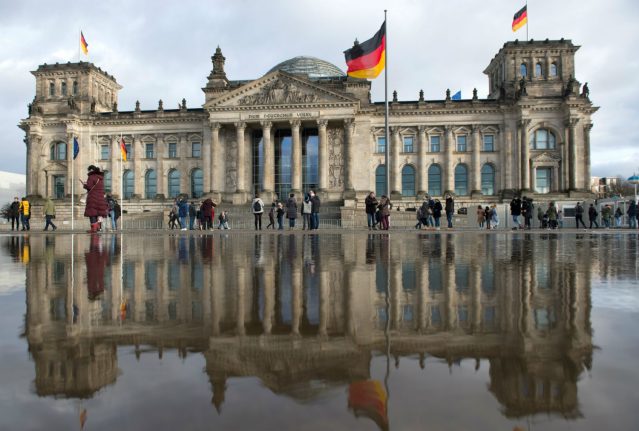 On Wednesday afternoon, a mere 136 days after the election, Angela Merkel was able to announce that she had reached a deal with the Social Democrats to form a new grand coalition government. The deal still isn’t sealed though – we will now have to wait three weeks before it's put to a vote of the SPD membership.

Even then, there are serious questions over whether the coalition will hold together. Wednesday's agreement was met by immediate grumbling inside the CDU, with one MP calling it a “miserable” result.

Still, it seems Merkel has managed to pee into the tank to keep the motor of German politics running for a few more miles. But it is also clear that she has lost her map. Where she is heading, there is neither petrol nor water.

If you look at how long it has taken to build new governments over the past two decades, a pattern emerges. Between 1994 and 2002 it took around 30 days to swear in new governments, as negotiations took place either between two parties on the right or two parties on the left. But in 2005, 65 days were needed to form Merkel’s first grand coalition. In 2013, it took 86 days. This time we’re looking at closer to 200.

It is surely clear to everyone, including Merkel, that things can't go on like this. If they were to try a rerun in 2021 they would probably still be talking by the time the next election came around.

The problem is obvious. Every time the two old adversaries go into coalition together, they seem to become one another. The SPD vote through right-wing laws like the foreigner road toll, the CDU support the minimum wage. They have to – that's what the coalition deal commits them to. But in doing so they erode their grassroots support and make disgruntled voters at the fringes of the two Volksparteien (people's parties) easy pickings for populists.

The SPD have felt the brunt of voter anger hardest, due to the fact they have played second fiddle to Merkel's CDU. Since the turn of the millennium they have lost 10 million voters and last year they recorded their worst post-war result.

As the Social Democrats have sunk, the left-wing Die Linke and the ecologist Green party have seen their support bloom. Whereas the two parties had a combined support of 11.8 in 1998, last year they won a combined 18.1 percent.

For a while, it seemed like Merkel could put on SPD clothes and still convince her base that she was a conservative.

But the discontent was there. Sections of her conservative base were grumbling about immigration before the refugee crisis, with weekly Pegida demonstrations pulling in crowds of thousands. When Merkel decided to welcome Syrian refugees into Germany in 2015 – and at the same time suggested most Germans had only a superficial knowledge of Christianity – the backlash was furious. She went from being Mutti to a Volksverräter (traitor) in the blink of an eye.

The result was the emergence of the Alternative for Germany (AfD), a party which placed itself as anti-Muslim and anti-refugee in order to exploit this anger. Before the refugee crisis, they were a fringe party – now they are set to become the official opposition.

The AfD have clearly been reading from Die Linke's playbook. It was remarkable to see how similarly the two parties reacted to the coalition deal.

Die Linke leader Sahra Wagenknecht told Die Zeit on Thursday that the SPD were no longer a left-wing party.

“I wish that the SPD would become a social democratic party again, then I would have a lot in common with them. But the current SPD is in the process of ruining itself,” she proclaimed. “They have been pursuing policies against the interests of their own voters.”

On the other side of the debate, AfD leader Alexander Gauland accused the CDU of becoming a social democratic party.

“All that remains of the CDU is an empty shell,” he said. “The CDU party has been given up entirely to make sure that Merkel could hold onto her power and so that the SPD would come on board.”

Of course, the reality is more complicated – the SPD wrestled legislation on the gender pay gap from the CDU in the last election, while the CDU held onto their cherished balanced budget. Meanwhile, the fact that the parties can govern together shows that there is a wide societal consensus on key issues like Europe. But that’s not the point; more and more voters just see SPD policies when they look at Merkel and only see CDU policies when they look at the SPD.

At the same time, the strategy employed by both major parties to try and stop the rot has failed. They have portrayed Die Linke and the AfD as resurrections of Germany's autocratic past and have broadly ruled out any kind of alliance with them at the federal level. But voters have shown again and again that they aren't listening to the dire warnings.

The result is an ever more fractured political system that is on the point of coming to a complete standstill.

History shows that the two major parties will lose even more support at the next election in 2021, making another grand coalition impossible. The most likely outcome will be that a Frau Wagenknecht or a Herr Gauland will be sitting at cabinet meetings – let's just hope they won't be at the head of the table.