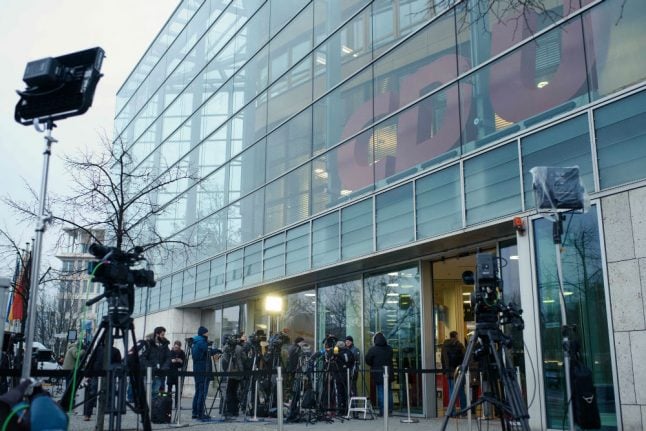 The talks are being held on Wednesday in Berlin at Konrad-Adenauer-Haus. Photo: DPA

According to the German Press Agency (DPA), reports in information from participants in the talks state that the coalition deal has been struck. Now it will be put to a vote of the membership of the SPD.

Talks had been held as the parties wrangled over who would get key ministries.

The SPD managed to wangel the Foreign Ministry, the Finance Ministry and the Labour Ministry out of the talks. They appear to have done pretty well for themselves there. While they held the foreign and labour posts during the last administration, they have added the powerful finance ministry to their portfolio.

The centre-left party will also hold onto the justice, family and environment ministries, all of which they held in the last government.

According to DPA the parties had been haggling through the night on who would take the Labour ministry, with the CSU desperate to get their hands on it.

The CSU, meanwhile, have been given a role at the Interior Ministry which appears to be something of a novelty as it will include responsibility for Heimat (home) – that rather untranslatable German word is a nod to conservatism and its current obsession with “German values.”

CSU leader Horst Seehofer is coming to Berlin to take on the role of interior minister. At the end of last year it seemed like his career was over, but he appears to have rescued it to some degree.

The Bavarian party have also held onto the Transport and Development Ministries. In this government the Transport Ministry will include the competency of digital infrastructure.

The only question is – with so many key ministries going to the other parties – what have the CDU kept for themselves? One assumes they have kept defence, but there is not much going other than that.

Merkel and Social Democratic Party (SPD) leader Martin Schulz had sat down Tuesday morning for what was supposed to be the final day of haggling over details in a process begun in early January.

But negotiations ran on into Wednesday, as senior members of Merkel's Christian Democratic Union (CDU) huddled around midday to rake over the results.

The SPD has been deeply divided on whether to back her for chancellor for a third time, with opponents in the party pointing to a crumbling of support for the 155-year-old movement from almost 35 percent of the vote in 2005 to just 20.5 during the Merkel era.

Leader Schulz needed to return from the talks with trophies to display to his rank and file, torn between the desire to renew themselves in opposition to Merkel and the urge to put country over party and back a stable government.

Major sticking points were reportedly reform to Germany's two-tier public and private health insurance system and setting limits to temporary work contracts, questions the SPD is determined to address in the coalition agreement.

On the pressing issue of reform to the European Union and euro single currency, CDU and SPD have agreed in principle to French President Emmanuel Macron's proposals, especially to outfit the eurozone with its own budget for investments managed by a joint finance minister, a draft of the coalition accord seen by AFP showed.

The delay in building a government in Germany has left Paris and other European capitals anxious and has diminished Merkel's international stature as the leading stateswoman in Europe — and perhaps even “leader of the free world”, as she was dubbed by some media outlets in the wake of Donald Trump's election.

Although it came first in the September polls, her CDU notched up its worst score in an election since the founding of the modern German state in 1949.

And widespread anxiety about Merkel's opening of the country to more than one million migrants and refugees since 2015 has borne the far-right AfD into parliament for the first time, complicating coalition arithmetic.

After a first attempt to form a coalition with the ecologist Greens and the pro-business liberals fell through in November, Merkel was forced to turn to the reluctant SPD for talks while she and her ministers worked on as caretakers.