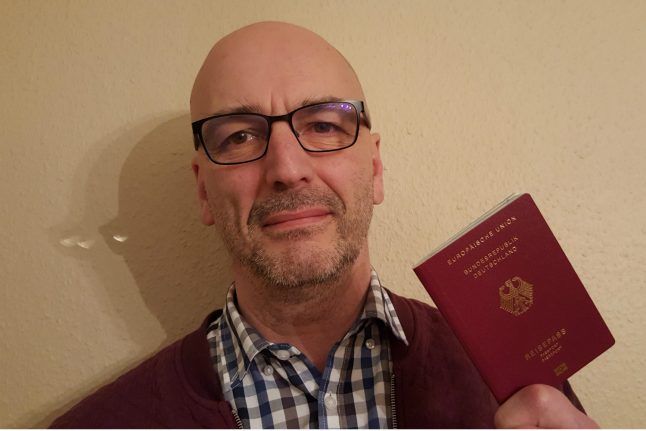 This is the third in a series of profiles exploring the experiences of people who have gained German citizenship and the impact it has had on their lives.

For Hamburg resident David Scott, hearing the result of the Brexit referendum was like having the rug pulled out from under his feet.

“I was gobsmacked,” he recalls, “I never believed it would happen.”

For many Brits like Scott who have built lives for themselves on the continent, the announcement triggered concerns about the future, particularly as attempts by the British government to explain the plan for Brexit have been vague to say the least.

But for Scott, his concerns were less about how Brexit could affect his life in Germany, but more about his daughter’s future.

“My daughter was born in Germany, but had British nationality from birth and now studies at a university in the UK,” he explains.“I wanted to be certain that Brexit would hold no surprises for her future.”

So, in late 2016, Scott and his daughter made the decision to both apply for dual German and British citizenship.

“I think it is more important for my daughter to have dual nationality than me,” he says, “Really I think I've been here far too long to have any problems due to Brexit, but having German citizenship will make things a lot easier in a lot of respects later.”

Although proud of his Yorkshire heritage, Germany has been Scott's home since 1976.

“After leaving grammar school, I came to Germany for twelve months, mainly due to the economic situation in the UK, and to improve my German.”

But when the twelve months were up, Scott decided he wasn't ready to move back to England and, over the next 40 years, he built a life for himself here in Germany.

“I got to know my wife, a Turkish national who later naturalised as German, and that was basically it,” says the 60-year-old.

He learned his trade as a ‘Großhandelskaufmann’ (wholesaler) in Hamburg and, after marrying, settled in a small town near the city.

Scott's wife later gave birth to their daughter and, despite the fact she was born in Germany, she actually received British, not Germany citizenship.

“The 'Standesbeamter' (registrar) said that, according to German and British law, the child automatically got the citizenship of the father,” he explains, “That suited me at the time. Back then I didn't think it was necessary for her to get German citizenship, and to be honest I didn't want it for either of us.”

READ ALSO: 'Paperwork was out of this world': the ups and downs of getting German citizenship

It was only after the results of the Brexit referendum were announced in June 2016, that Scott began to change his mind about whether his daughter should get German citizenship.

“It was only after careful consideration that I decided to apply with her,” he says.

“We chose to do it now, while dual citizenship for British nationals is still a possibility. Even though I have been out of the country for so long, I am still British and would never give up my British passport.”

Scott was not worried about Brexit having a negative effect on his own future but instead was concerned about the effects on his daughter’s freedom to live and work in the EU.

“The main motivation of course was to secure my daughter's future because she is currently in the UK studying at university. The last thing I wanted was for the door to the EU to shut on her.”

“She has her whole life in front of her, and when she finishes her studies, Brexit will have been executed. It would be tragic if she couldn't easily come back into the country.”

David Scott’s story is an increasingly common one. According to research by The Local last year, the number of Brits seeking German passports shot up fivefold in the year after the Brexit vote, a figure which is only expected to rise.

Read the previous article in this series: 'We reclaimed what was taken from my Jewish grandparents – German citizenship'