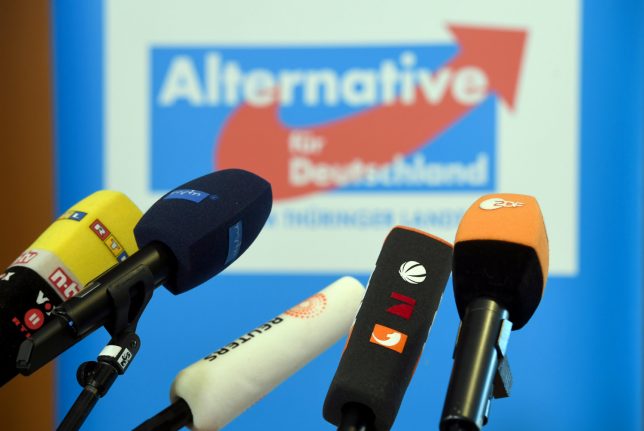 The poll also puts the anti-Islam Alternative for Germany (AfD) party on 15 percent, just two percent behind the Social Democrats (SPD) on 17 percent. Merkel’s Christian Union (CDU/CSU) would win 30.5 percent of the vote, the poll predicts.

As the CDU/CSU enter the final stages of trying to thrash out a new deal for a grand coalition government with the SPD, the poll makes worrying reading for the main parties. Their proposed government has already been dubbed a “coalition of losers” due to the fact that both parties leaked millions of votes at the ballot box in September’s national election. The SPD's vote share of 20.5 percent was their worst result since the Second World War.

The popularity of the far-right AfD has been creeping up in recent weeks, with several polls putting them on 14 percent or above.

They entered the Bundestag for the first time in September after winning 12.6 percent of the vote. The party was set up in 2013 and fought the election of that year on an anti-Euro platform, but failed to make it over the 5 percent hurdle needed to make it into parliament.

Last year they ran a campaign fiercely critical of the government’s refugee policy, which had led to over a million people applying for asylum in Germany since 2015.

The leadership of the AfD rejects the label of far-right, preferring to describe themselves as conservative. However, they remain highly controversial due to various statements by senior party members which have challenged a political consensus concerning how Germany treats its Nazi past.

Björn Höcke, the AfD leader in Thuringia, has lambasted Germany’s culture of remembrance of the Holocaust, labelling the Holocaust Memorial in central Berlin a “memorial of shame.”

Party leader Alexander Gauland, meanwhile, said during election campaigning last year that Germany should be proud of the service of its soldiers in two world wars.

The party has also been sharply criticized for its attitude to Islam, which it describes as “not belonging to Germany.” There are roughly 4.7 million Muslims in the Bundesrepublik, making up 5 percent of the population.