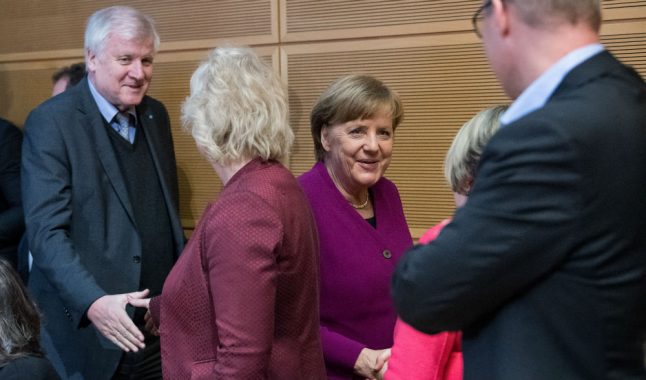 Horst Seehofer (l), Chairman of the Christian Social Union (CSU), and Angela Merkel, Chancellor, arrive for a new round of negotiations on Friday. Photo: Bernd von Jutrczenka / dpa +++
Merkel professed her “good will, but also some expectation that there will be tough hours of talks ahead” as her Christian Democratic Union (CDU) negotiators arrived at Social Democratic Party (SPD) headquarters in Berlin.
“We will have to negotiate very, very intensively today” especially on areas of social policy like labour law, healthcare reform and housing, SPD chief Martin Schulz said, adding that the wrangling could go on “until late in the evening or the night.”
Even more important than speedy progress was a “dependable coalition agreement that achieves consensus” for a stable government, he continued.
More than four months after an election beating for both parties, leaders hope to wrap up talks on repeating the “grand coalition” or “GroKo” that has ruled since 2013 by Sunday evening, with the option of extending into Monday or Tuesday.
Germany's partners abroad are watching impatiently from the sidelines, as Berlin has been paralysed since September on urgent issues like reform of the European Union.
Both sides are reluctant to compromise too much and risk losing support, but are equally fearful of going back to voters in repeat elections that could see a further rise of the far-right.
Neither can they afford to dig in their heels, as a poll for ARD television showed 71 percent of people do not understand “why forming a government is taking so long”.
At stake for Merkel is whether she leads a stable coalition into her fourth term, or risks a fragile minority government or new elections. The SPD is a reluctant partner, having initially vowed to go into opposition after plunging to a historic low vote share of 20.5 percent in September.
Social Democrats agreed to talks only after Merkel's soundings with two smaller parties, the ecologist Greens and the pro-business Free Democrats, fell through.
Challenged by rebels within his own ranks, SPD leader Martin Schulz has sought political cover by putting any final coalition deal to a vote by all 440,000 members.
Kevin Kühnert, leader of the SPD youth wing, has become a standard bearer for opponents of a new deal with Merkel.
“This kind of politics was rewarded with a 14 percentage point drop (for CDU and SPD combined) last year, and I suspect things will continue that way” if the coalition materialises, he has said.
Others warn the SPD is too weak to face voters again so soon, garnering 18 percent in some polls — just a few points ahead of the far-right Alternative for Germany (AfD).
Merkel too faces grumbling among her troops, with more conservative voices accusing her of marching her Christian Democratic Union (CDU) too far into the political centre, giving up terrain to the AfD.
Meanwhile, the press has scented the end of an era approaching. Eight years of GroKo under Merkel — from 2005-09 and again from 2013-17 — had shown that “the lowest common denominator achieves nothing as long as there is no overarching idea,” commented Stefan Braun for the Sueddeutsche Zeitung.
Public backbiting between the parties had highlighted how “hesitant, quarrelsome, demoralising and above all uninspiring” the whole process was, he wrote.
Merkel and Schulz should offer honest, ambitious answers to the country's big challenges or “leave the way clear for new leaders or new elections”.
The far-right has profited from public fears about the arrival of more than one million migrants and refugees since 2015. It dances along the line between widespread concern over the effort that integrating so many new arrivals will take and outright racism, xenophobia and conspiracy theories.
And the AfD's entry into parliament, complicating coalition arithmetic, is largely what has forced the unwilling CDU and SPD together again. Merkel's struggles to form a government have had consequences abroad with
some now looking to Paris and youthful President Emmanuel Macron of France for leadership rather than to Berlin.
Germany — a vital partner for reforming the EU — has been guardedly open to some of Macron's grand plans for the bloc.
But Schulz, a former European Parliament president, has founded his decision to enter talks with Merkel on determination to seize the hand proffered by France.
“The fight for a stronger, renewed Europe” must be top of the new government's to-do list, he declared last week.