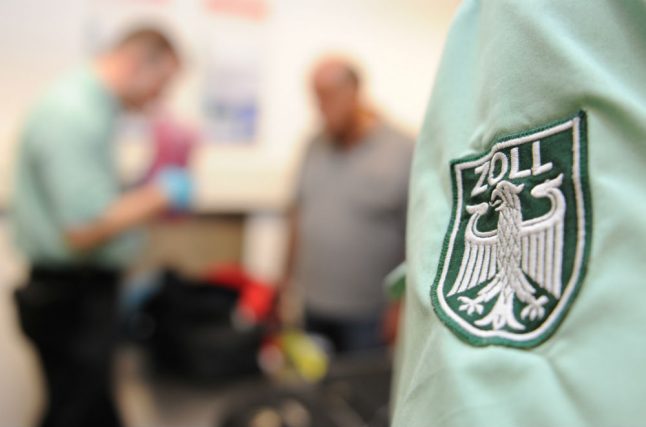 When Pa Louis Sambou left London on a train journey bound for Bielefeld, North Rhine-Westphalia on a summer’s day in July 2016, he had no idea he would seek legal advice once he’d entered Germany.

“I never experienced this ever before in my life,” the 29-year-old UK national told The Local.

Sambou says it all started once his train crossed over the Belgian border and, not far from Cologne, several customs officials got on board. He says one of them entered his carriage, went straight to him and asked for his ID, skipping the white passengers sitting around him.

After the officer had seen Sambou’s British passport, he made the “bizarre request” to inspect his train ticket. According to German customs administration law, it is illegal for customs officers to check train tickets as this isn’t their responsibility.

“I told him if he wants to see my ticket, he needs to ask others for their tickets too,” Sambou, who studies law in Nottingham, said.

That’s when the officer got aggressive, handcuffed him, hit him in the face and he fell to the floor.

At that point the other officers joined and his rucksack was confiscated, but not before one of the officials kicked him in the buttocks and another pressed down on his neck as he lay still on the floor.

While they waited to arrive in Cologne and he repeatedly pointed out their misconduct, Sambou says the officials made comments like “you think you’re getting special treatment because you’re black” and “I can do whatever I want and nothing will come of it.”

He was escorted to federal police quarters at the main station in Cologne where he was told he had to be searched for drugs. When they eventually let him go, he left with a gash on the face and swollen, bloody wrists. Over €500 in cash, two mobile phones and a watch were also missing from his luggage and rucksack, he claims.

“They shouldn’t be allowed to carry on this way,” says the 29-year-old, who believes he was a victim of racial profiling.

The federal customs office in Cologne have defended the actions of their officials and deny accusations of discrimination, assault and theft.

In a letter responding to the formal complaint the Brit had submitted, they state that he was the one who reacted aggressively and that his injuries “resulted from the necessary use of simple force” due to his “resistance” during the inspection.

“Skin colour was not a criterion” during the check which was carried out “at random and based on the experience of the officials.”

Sambou’s lawyer, Kathrin Julia Sachsenberg, says her client's account is credible. “He was discriminated against as a black man,” she told The Local.

But he’s in a “bad position” because he has no witnesses apart from himself. Nor does he have a doctor’s report of his injuries. Meanwhile there’s “simply no proof” that his stuff was stolen, she added.

A prosecutor in Cologne sent her a letter in December stating that Sambou's case wasn't going to get any further. “They’re obviously not certain they’ll get a conviction,” Sachsenberg said.

For Sven Adam, a lawyer who’s dealt with several racial profiling cases in recent years, it’s “not surprising at all” that the officials rejected Sambou’s claim of discrimination.

“Federal officers say ‘racial profiling doesn’t exist here’ but factually it exists,” Adam told The Local, adding that it’s been happening everywhere in Germany for years – in spite of Article 3 in the constitution which states that no one may be discriminated against based on their skin colour.

“The problem is that there are no procedural guidelines,” Adam says, which is why officials can inspect someone based solely on their looks.

The police try to defend their actions by saying things like a person had to be checked because they appeared nervous or looked out of the window a certain way, according to the lawyer. In court though, these often turn out to be claims that can’t be proven.

Maggie Ibiam is another black British citizen who believes she was racially profiled upon entering Germany.

When the 27-year-old Berlin resident arrived back at Schönefeld Airport last December after a trip to Spain, two plainclothes customs officers approached her after she’d picked up her luggage and was heading for the exit.

After they demanded to check her belongings and she noticed she was the only black person in the area, she refused, questioning why they had singled her out.

Ibiam told The Local she was then taken into a small room and one of the officials accused her of carrying drugs. What ensued over the next half hour was a “humiliating” experience for the Brit as the two men searched her luggage in what they described was a “routine inspection.”

For Ibiam, this was a “clear abuse of power.” When she asked them why they stopped her and nobody else, according to her account, they said, “you’re acting like someone who’s taking drugs.”

The head customs office in Potsdam told The Local in response to the incident that, in order for officials to do their job of protecting citizens efficiently, they carry out spot checks via a “modern risk analysis system” where aspects such as the origin of a flight can play a role.

“We do not choose travellers for a customs check based upon their nationality, religion or something else,” they added.

For Tahir Della, a Berlin-based spokesperson for Initiative Schwarze Menschen in Deutschland (ISMD), an NGO that defends the rights of coloured people, authorities “have absolutely no idea” that what they’re doing is racist.

“Their idea of racism is if you’re an Alternative for Germany (AfD) member for instance or a Nazi,” he told The Local.

Racial profiling in Germany is a “societal, structural problem” that isn’t being discussed, he added.

Della argues that many black citizens and non-citizens in Germany today are still considered foreigners and “not seen as part of society.” He says this is one example that shows Germany’s narrow understanding of racism.

In a country where the majority of the population is white, those who aren’t white are “automatically classified as a foreigner,” Della said.

SEE ALSO: It’s time we stop asking ‘where are you from?’ in Germany

American journalist Sandhya Kambhampati knows the feeling of being seen as a foreigner all too well. Within her first nine months of living in Berlin in 2016, Kambhampati was stopped by police 23 times.

When she asked people to share their stories of racial profiling in Germany for her own reporting on the topic, she says that hate messages from people who questioned her nationality only fueled her research.

Out of the 700 responses she got, 400 were from people who had had similar experiences. One of the messages was from a man based in Hamburg named Dennis who’s married to a black Brazilian woman.

Dennis told Kambhampati: “It happens way too often that black Germans are still confronted with stupid phrases like: ‘Wow, your German is great’ or ‘But seriously, where are you really from.’ I think that it is this kind of thinking that gives the foundation for racial profiling as these attitudes are deeply embedded in the everyday narratives of our society.”

Each time a person of colour is racially profiled, it reinforces societal stereotypes and the police underestimate this, Maria Scharlau, an international law and human rights expert at Amnesty International told The Local.

Scharlau meets with the police frequently and often speaks at conferences about racial profiling. She says that when she talks to officers about this topic, sometimes they get really angry.

“Some of them think they’re just doing their job and that people are being too sensitive,” Scharlau said, adding that it's important to point out to the police that racist behaviour can be displayed consciously or unconsciously.

Amnesty International has been asking for more and better training programmes not only at the federal level, but at every level of the police authorities, Scharlau added.

“It’s the state’s job to protect people from racism. But if judges and prosecutors aren't trained to detect it, they won’t be able to prosecute hate crimes.”

In the meantime there have been cases of judges ruling in favour of those who believe they have been wrongfully checked by officers based on their skin colour.

In a 2012 administrative court case in Koblenz, for instance, a police control was declared illegal after an officer admitted to inspecting a young man because he was black. Sven Adam was one of the leading lawyers in the case.

Some German police have shown they want things to change by increasingly organizing conferences on racial profiling, but for Scharlau, “it’s not enough.”

“It would change a lot if officers had to answer to why they inspect people, but there’s no political will for it,” said Adam.

According to Della, “in order for the structure to change, we have to take racism as a fact.”