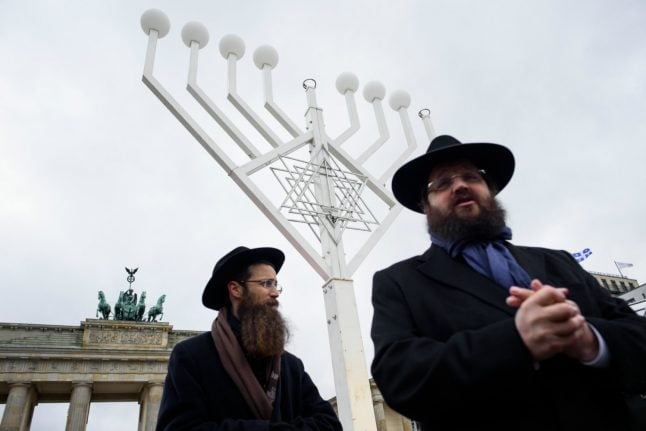 At a ceremony on Saturday to mark Holocaust Memorial Day, Angela Merkel said that “it is inconceivable and shameful that no Jewish institution can exist without police protection, whether it is a school, a kindergarten or a synagogue.”

As if it weren’t worrying enough that, seven decades after the Holocaust, Germany still feels the need to put police in front of synagogues, rights organizations warn that the situation is getting worse.

The head of the German chapter of Human Rights Watch, Wenzel Michalski, said recently that anti-Semitism is growing “ever more virulent and more violent”.

Josef Schuster, director of the Central Council of Jews, told Bild on Sunday that taboos that had existed for decades after the war seemed to be crumbling.

“People increasingly dare to say things today that they always thought but never would have expressed,” he said.

Schuster added that tensions had been aggravated in the last two years by the influx of refugees “some of whom grew up with anti-Israeli and anti-Semitic rhetoric”.

It is not just refugees who are being blamed for an apparent rise in hatred against Jews.

Deutsche Welle columnist Jens Thurau argued earlier this month that “anti-Semitism has clearly intensified over the course of the last several years. It seems that this taboo has been broken in these times of growing nationalism and right-wing populism.”

Thurau blames the Alternative for Germany, a populist party which won over 12 percent of the national vote last year, for stoking anti-Semitism.

“Far-right Alternative for Germany party firebrand Björn Höcke can label the Berlin Holocaust memorial a ‘monument of shame’ without fearing the consequences, not even within his own party. The genie is out of the bottle,” he warned.

In actual fact, the jury is still out on whether this much lamented rise in anti-Semitism is actually taking place.

While surveys among Germany’s Jewish population paint a sobering picture of the aggression they face in their everyday lives, there is no evidence in police statistics to suggest a downward trend.

Interior Ministry figures published in April show that overall anti-Semitic crime – which includes a variety of crimes from hate speech, to threats, to assault – has fallen since the start of the millennium, while anti-Semitic acts of violence have also dropped off slightly.

“Figures for 2015 continued a trend of a drop in the number of anti-Semitic crimes that was seen between 2010 and 2013,” the Interior Ministry notes.

Preliminary figures for 2016 and 2017 suggest that the prevalence of this type of crime remained steady throughout the refugee crisis. In the first half of 2017 some 681 anti-Semitic crimes were recorded, a slight increase over the same time period in 2016 (654), but still below the average for the preceding decade and a half.

Official figures also provide no evidence of an increase in anti-Semitic violence. Compared to a high of 64 acts of violence in 2007, there were 36 recorded in 2015. (Preliminary numbers for the first half of 2017 show 15 acts of violence.)

There is also a weak link between immigrants and anti-Semitic crime. Of the 1,366 anti-Semitic crimes recorded in 2015, only 78 were attributed to migrants. The vast majority (1,246) have been pinned on the extreme right, although there has been criticism of how these crimes are categorized.

The Interior Ministry concludes that “anti-Semitism should be seen as an urgent problem.” But it also stresses that “anti-Semitic attitudes reached far further into the middle of German society in the decades after the war than they do now.”

And it is just as circumspect about attributing blame to specific actors.

“Few reliable insights into the extent and character of anti-Semitism among young migrants exist,” the report notes.

It goes without saying that any anti-Semitism is too much anti-Semitism. But in a time when society's ills are too readily blamed upon new phenomena like refugees – or even the AfD – a lack of official evidence for a rise in anti-Semitism should give us pause for thought.