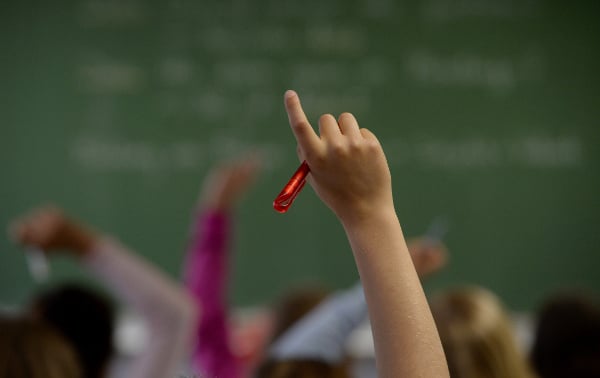 Photo: DPA
According to a new PISA study, socially disadvantaged school pupils have made up for lost ground in Germany.
After only one in four pupils in the study achieved a good performance in 2006, almost one in three of these pupils (32.3 percent) performed solidly in 2015, as OECD Education Director Andreas Schleicher said on Monday in Berlin.
The proportion of strongly performing pupils from a difficult social and economic situation grew more than in almost any other country in the Organisation for Economic Cooperation and Development (OECD).
A decade and a half after PISA gave Germany a scathing report in 2001 due to below-average performance and social injustice in schools, the result makes for encouraging reading. Nevertheless, according to the study, Germany still remains below the OECD average in terms of equal opportunities.
“Social background is still a barrier,” said Schleicher.
The PISA results clearly set out how more opportunities could be created for disadvantaged pupils, listing more all-day schools, the merging of Realschulen and Hauptschulen, the establishment of more early childhood education at daycare centres and stronger support for pupils from migrant families.
“We must continue along this path,” said Schleicher, adding that “the last train is leaving the station. People who fail due to a missing out on a good initial education will hardly have a chance later on.”
Schleicher said that a positive school climate with a stable roster of teachers and a motivating leadership style are central to improving standards. The OECD Education Director said that teachers should be given time to address the different learning needs of individual students and groups of pupils. Pupils should be able to promote and address their talents and weaknesses outside the classroom as part of full-day activities.
“Class sizes and technical equipment do not in themselves create better learning conditions. The number of computers and tablets also says very little about the working atmosphere,” said Schleicher.
PISA is the world's largest school performance study and records the competencies of 15-year-olds in 80 countries.