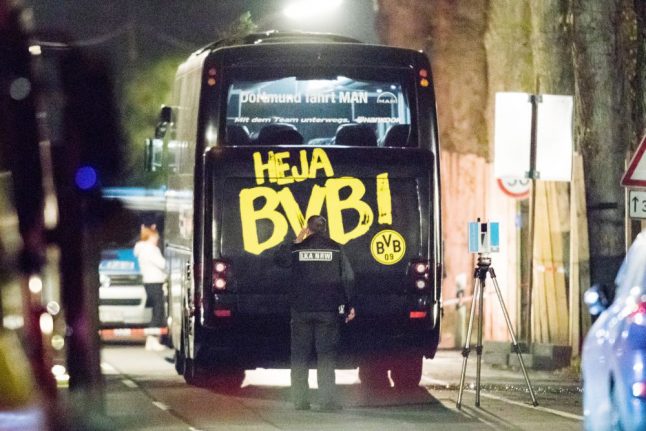 Bartra, 27, was testifying in the trial of German-Russian man Sergei Wenergold, who has admitted to remotely setting off three explosions in an elaborate bid to make a fortune on the stock market.

Bartra, who suffered a fractured wrist in the attack, said he had had nightmares since the traumatic event, which left him in hospital for five “terrible” days.

“I still haven't fully got over the attack and continue to suffer,” the player said in a written statement read at the hearing in Dortmund.

“I suffered mortal fear and was afraid I would never see my family again.”

Prosecutors say the three fragmentation bombs each contained up to a kilogramme (2.2 pounds) of a hydrogen peroxide mixture and around 65 cigarette-sized metal bolts, one of which ended up lodged in Bartra's headrest.

They charge that Wenergold had sought to profit from an anticipated plunge in the club's stock market value by cashing in on so-called put options, essentially bets on a falling share price.

'Happy to be alive'

Bartra recounted that straight after the blasts, he heard a ringing in his ears while the other passengers screamed.

“I feared there would be more attacks,” he said. “My arm was bleeding, I was dizzy.”

With the help of an interpreter he spoke in the hearing of his nightmares and later the sense of “panic” at having to face the attacker in court.

After the bombing, police initially suspected a jihadist attack, but then arrested Wenergold 10 days later.

The 28-year-old electrical technician has been charged with 28 counts of attempted murder as well as setting off explosions and causing serious bodily harm.

He had allegedly remotely set off the three explosive devices hidden in a hedge as the bus was leaving the team hotel for a Champions League match.

He was staying in the same Dortmund hotel as the players, had a view of where the bombs went off and had bought the put options on the team's shares on the day of the attack, prosecutors said.

The defendant reportedly drew attention at the hotel, first by insisting on a window room facing the front and then, in the chaos after the blasts, by calmly walking into its restaurant to order a steak.

Wenergold faces life in prison if found guilty, although in Germany parole is usually granted after 15 years.