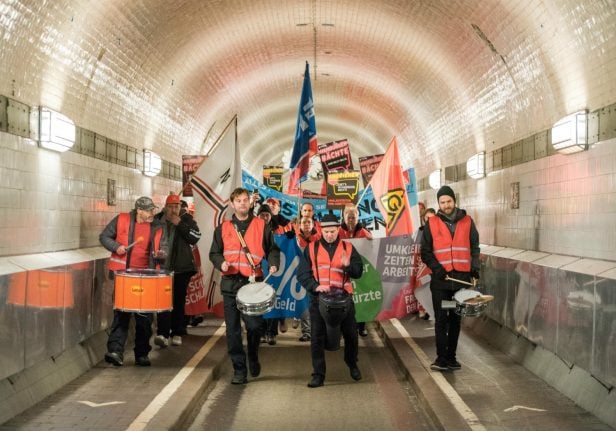 Leaders of IG Metall, Europe's biggest labour union, and of German employers' groups were to meet Thursday to decide on the course ahead.

IG Metall demands a six-percent pay rise and the right for all workers to temporarily switch from a 35-hour to a 28-hour week.

It also wants companies to make up some of the salary shortfall for those workers who reduce their hours to care for children or elderly relatives.

Employers fear that hundreds of thousands could opt to go part-time, leaving factory floors bare, and argue that the change would be unfair to those who have already taken a pay cut when switching to shorter hours.

The two sides had met until late Wednesday in the southern city of Boeblingen before talks broke down.

Union representative Roman Zitzelsberger said that “we offered compromises on all contentious issues and did everything to avoid a phase of escalation”.

IG Metall has since January 8 launched “warning strikes”, or work stoppages of a few hours each, at 785 sites, and mobilised 910,000 strikers, according to the union.

IG Metall, boasting some 2.3 million members, represents workers at Germany's auto giants and industrial conglomerates like Siemens or Thyssenkrupp and in the electronics, textile and other sectors.

The sheer weight of the metal and electrical industries' 3.9 million workers often draws other sectors along in its wake when it comes to pay deals in Europe's biggest economy.

Germany's EU neighbours and the European Central Bank, whose board met Thursday, are watching the labour dispute closely for it potential impact on both economic growth and inflation.