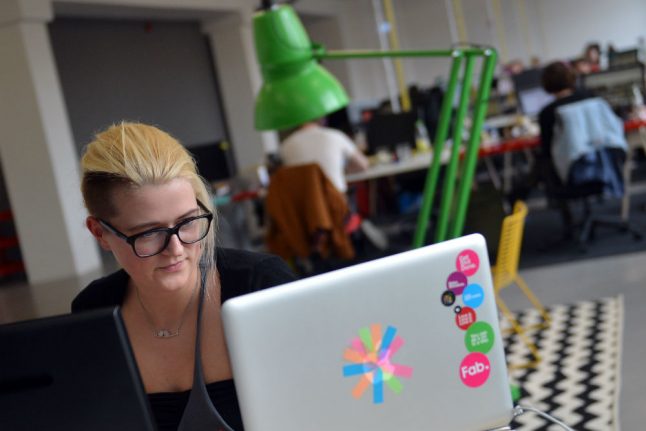 An employee at a startup in Berlin. Photo: DPA

In the third edition of the annual ranking, which evaluates 80 countries on criteria ranging from power to citizenship, similar to last year, Germany nabbed the gold medal in terms of entrepreneurship.

Not only is Berlin’s tech scene gunning to compete with London as Europe’s hub for startups, the German capital’s so-called Silicon Allee has even been compared with San Francisco’s Silicon Valley.

New data released by Founder Institute in November moreover indicated that Berlin and Munich founders are similar in that they are more open, creative and extroverted than founders elsewhere across the globe.

According to the World Bank, Germany spends 2.88 percent of its gross domestic product on research and development.

In spite of its position at the top of the ranking for innovation and its enterprising citizens, in the U.S. News ‘Best countries to start a business’ category, Germany didn’t even make it into the top 25. This could be due, in part, to meager venture capital possibilities and the large bureaucratic burden of starting a business in the Bundesrepublik, as a late 2016 report found.

Bronze in the overall ranking

Nevertheless in the overall ranking, which is “dominated by countries with more progressive social and environmental policies,” Germany came in third place, following only Canada (second) and Switzerland (first).

Deutschland moved up one spot from last year’s ranking, kicking the U.K. down to fourth place.

U.S. News attributes this rise to “Germany’s reputation as an open nation with government transparency and strong gender equality.”

SEE ALSO: ‘How much do you earn?’ New law tackles gender pay gap

For the first time, respondents in the 2018 report were asked their opinions of major world leaders. Along with Canada’s Prime Minister Justin Trudeau, Germany’s Chancellor Angela Merkel was on a global scale viewed as the most respected leader.

“It is once again clear that military vigor and economic power are no longer the key determinants to a country’s brand success,” says David Sable, CEO of Y&R Global, a consultancy which helped produce the Best Countries report.

“Nations that are multidimensional and that reflect a wider range of qualities, such as innovation and compassion, have the brand appeal that propels them on the global stage,” Sable adds.

Serbia, Angola and Algeria ranked at the bottom of the list in 78th, 79th and 80th place, respectively.

In order to compile the ranking, a total of 21,117 people from countries in the Americas, Europe, Asia, the Middle East and Africa were surveyed.