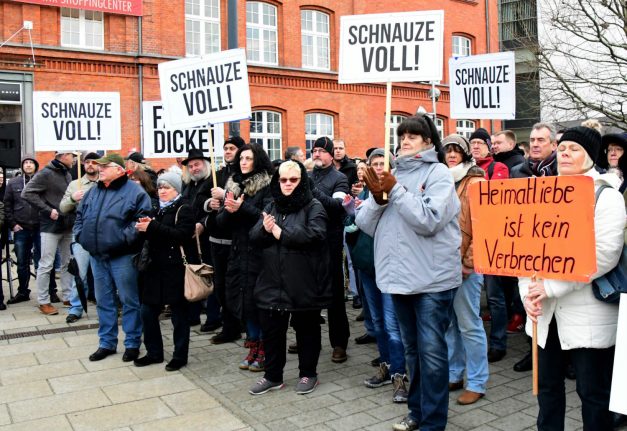 Demonstrators at an anti-immigration rally in Cottbus on Saturday. Photo: DPA

Police have upped patrols through the town, which lies around 130 kilometres southeast of Berlin in the state of Brandenburg. They made the decision last week, after three Syrian teenagers reportedly assaulted a man when he refused to let them enter a shopping centre before him.

Also last week, a Syrian teenager reportedly attacked a German teenager with a knife during a fight, leaving him with injuries on his face.

The increased police presence has as yet failed to calm tensions in the town, though. On Saturday evening an 18-year-old woman was taken into police custody after she came to blows with a Syrian male of the same age at a private party. She allegedly shouted “foreigners out” at him in the build up to the fight. Police took her into custody after she attacked a police officer who turned up at the scene.

A few hours later police were again called out when five Germans attacked two men of foreign appearance on a street. The German men reportedly pushed the two men, one of whom then sprayed them with tear gas before fleeing the scene.

Meanwhile on Saturday two journalists were attacked at a far-right march through the town centre. According to the organizers 2,500 people turned up for the demo. The Frankfurter Allgemeine Zeitung reports that neo-Nazis were among the participants, as were politicians from the Alternative for Germany (AfD) party.

Tensions have become so acute in Cottbus that Brandenburg has decided to stop sending any more asylum seekers to the town. The state’s interior minister, Karl-Heinz Schröter, announced on Friday that he had issued a “negative residency permit” for the city, meaning no more refugees would be sent from the state’s central refugee shelter to the town.

Three days previously, Cottbus had taken the unusual measure of giving a negative residency permit to one of the young Syrians involved in the knife attack at the shopping centre. The decision meant that the teenager and his father had to leave the town.

Refugee associations have previously criticized the negative residency permit as an infringement on the basic right to freedom of movement.

Over a million people applied for asylum in Germany in 2015 and 2016 when the German government decided to open its borders to refugees from war-torn Syria.

The arrivals have been particularly controversial in the east of Germany, were the anti-immigrant AfD won large sections of the popular vote at the general election in September.