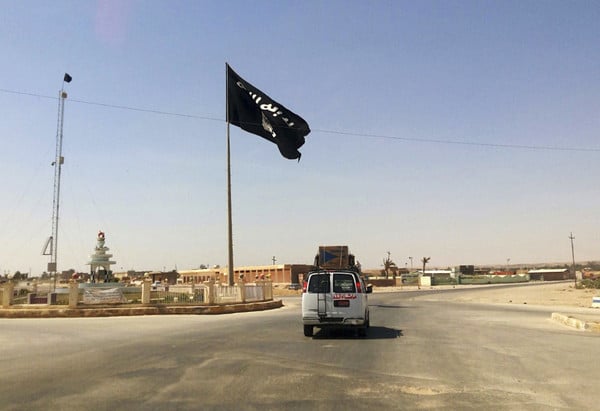 In a 2014 file photo, a pickup drives past an Isis flag in Rawa, Iraq. Photo: DPA
She was sentenced for providing “logistical support and helping the terrorist group to carry out crimes,” said court spokesman Abdel Settar Bayraqdar.
“The accused admitted during interrogations that she left Germany for Syria then Iraq to join Isis with her two daughters, who married members of the terrorist organisation,” he said.
In September 2017, the same court sentenced to death by hanging a Russian man who was captured in Iraq's second city Mosul and found guilty of fighting for Isis.
Iraqi forces expelled the jihadists from Mosul in July 2017, ending three years of Isis rule in the city. The same month, a German teenage girl suspected of joining Isis was arrested in Mosul, according to Germany's justice department.
German daily Der Spiegel reported she had been held in Baghdad with three other German women including one of Moroccan origin.
Baghdad declared victory over Isis in December after expelling the jihadists from vast areas of Iraq it seized in 2014.
There are no official figures for arrests of jihadists during the battle against Isis, but Iraqi commanders and Iraqi Kurdish fighters say hundreds gave themselves up. Others are said to have escaped by blending in with civilians fleeing the
fighting. In the province surrounding Mosul alone, more than 4,000 jihadists were arrested, police chief General Wathiq al-Hamdani said.
Despite Baghdad declaring victory over the jihadists, IS has continued to carry out attacks including in the capital.