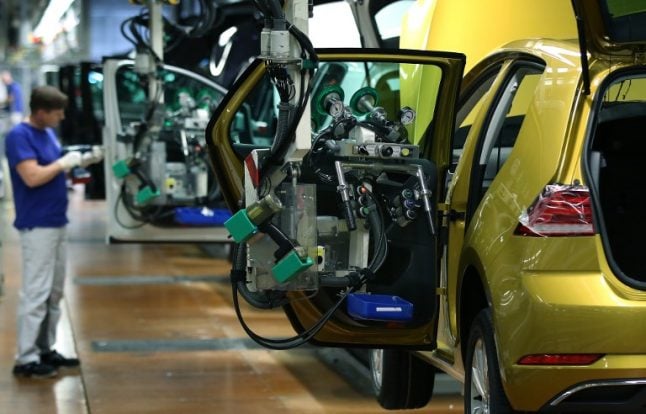 An employee of German car maker Volkswagen works on a Golf in a 2017 file photo. PHOTO: RONNY HARTMANN / AFP
Slated for release in 2019, the updated cars will be constantly connected to the internet, with greater self-driving capabilities and “more software than ever before on board,” VW compact cars chief Karlheinz Hell said in a statement.
Existing Golf models have a range of driver assistance features, including parking aids, staying in lane and maintaining safe distance in traffic jams and emergency braking. But they remain far removed from visions of completely hands-free
self-driving cars dangled by industry executives.
Some 34 million people have bought a Golf, the successor to the iconic Beetle, since the first model rolled off production lines in 1974, VW says, and the range accounted for almost one in 10 of the vehicles sold by the VW group in 2016.
“The next generation of the Golf is the most strategically significant launch for the Volkswagen brand” alongside the all-electric ID series set for release in 2020, VW board member Ralf Brandstaetter said.
VW will spend €1.8 billion ($2.2 billion) developing the new Golf, and plans to build it at its headquarters in company town Wolfsburg, northern Germany, the largest car factory in Europe.
The mammoth Volkswagen group with its 12 brands ranging from Bentley, Porsche and Lamborghini to VW, Skoda and Seat has largely shaken off the “dieselgate” scandal that saw it admit to cheating emissions tests on millions of cars worldwide in 2015.
In 2017, the group sold 10.7 million vehicles, an increase of 4.2 percent year-on-year.