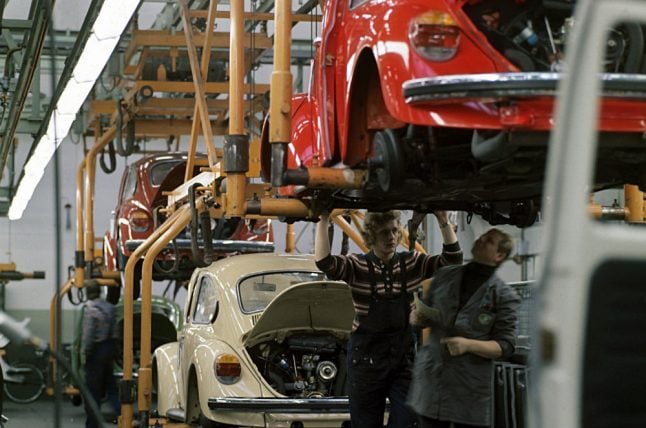 For many Volkswagen employees, January 19th 1978 was an emotional day. Some of them were tearing up at the plant in Emden, Lower Saxony.

After more than 16 million VW Beetles, or Käfer, had been produced, an era came to an end when the very last Beetle produced in Germany rolled off assembly lines at the plant in the port town.

But how exactly did a car VW described in archives as “neither fast nor particularly economical or comfortable” become one of the most popular cars in automotive history? It all goes back to its history.

Engineered by Ferdinand Porsche and styled by Austrian designer Erwin Komenda, the “People’s Car,” as its name made clear, was an economy car based on an idea that came from Adolf Hitler.

Hitler had wanted to develop an affordable car for the average German worker, and in 1933 Porsche accepted the technical challenge.

Still, it was only in 1947 that private individuals were finally able to buy the first Beetle models and from then, its popularity grew and grew. In 1955 the company celebrated the production of its millionth Beetle at the plant in Wolfsburg, Lower Saxony.

Soon the ladybug was gaining popularity across the pond in the US, helped by a ‘Think Small’ advertising campaign by New York agency Doyle Dane Bernbach in 1959.

Throughout 1960s America, the auto went on to become the biggest selling foreign-made car in the country, much loved by the counter-culture movement of the time with its funky design and cheap price.

“At the beginning, about ten Beetles were produced per day and the parts came from Wolfsburg,” says 83-year-old Willi Kuroswki.

The former welder and VW employee fondly recalls working in Emden with his colleagues, adding that “many friendships still hold true to this day.”

But VW was mistaken in thinking the success of the Beetle would go on forever, says car expert Willi Diez from the Institute of Automotive Economics.

In the early 1970s the company almost went under, Diez adds.

“By then the market had changed, and the Beetle suddenly looked old and it was technically outdated.”

If the Volkswagen Golf as the successor to the Käfer had not taken over immediately, the company wouldn’t have been able to save itself, according to Diez.

In all of automotive history no other car has been “as globally important as the Beetle,” says the car expert. Sales of the ladybug were impressive not only in Europe and North America, but also in Latin America.

But as with all good things, it eventually come to an end. In 2003, due to decreased demand, the last model was assembled in Mexico. By then, over 21.5 million Beetles had been built worldwide, making it one of the world’s best-selling cars.

Its affordability, reliability and distinct look and feel arguably helped ensure its success.

Despite an end in production, the much-loved iconic automobile lives on; nowadays it’s not uncommon to see them chugging along on German streets.

But for anyone interested in buying one, prices are pretty steep.

Henry Hackerott, who organizes Käfer meet-ups in Hanover, says a Beetle from the 1950s could set you back up to €30,000 depending on the condition.