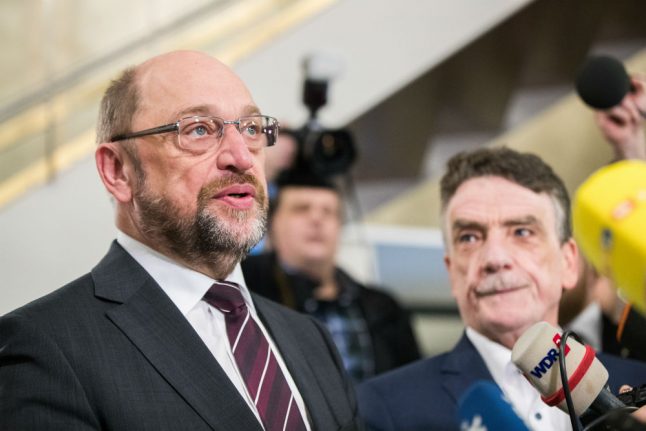 “We have members who say yes and those who say no – and in between we have a large number of those who are indecisive,” North Rhine-Westphalia (NRW) state leader Michael Groschek told radio station WDR2 on Tuesday.

According to Groschek, there is still a lot of uncertainty within the SPD before the vote on coalition negotiations at the party congress in Bonn on January 21st.

The vote in Bonn is important because it will determine whether or not the SPD will formally enter into coalition negotiations with Merkel’s Christian Democrats-Social Union (CDU/CSU) alliance. Approval among SPD delegates from NRW is moreover crucial for Schulz as almost a quarter of them will vote at the party congress.

But Schulz is optimistic, describing a meeting with fellow party members from NRW on Monday as a “very open and very constructive exchange of views.”

Deep scepticism however runs through the party, because of fears that to again govern in Merkel's shadow will force the SPD to betray its ideals and further damage its voter appeal.

On Tuesday, two Social Democrats from Dortmund spoke out against further talks.

“We recently formed a grand coalition two times and went out with a big defeat twice,” SPD MP Marco Bülow told ZDF, referring to election defeats in 2009 and 2017 after his party governed with Merkel’s conservatives.

“I'd rather have an SPD that starts in four years and is renewed with self-confidence and wants to change the country,” Bülow added. He describes the 28-page paper that is the result of five days of talks between the CDU and the SPD on forming a new government as only containing “band-aids where you actually need a social turnaround.”

Meanwhile another Social Democrat from Dortmund, Jens Peick, told Inforadio: “I believe that the SPD would lose even more of its profile in a “GroKo” and would then do even worse in the next elections.”

The party’s state executive board in Brandenburg on the other hand supported the start of negotiations on a grand coalition with a recent vote of 9 to 2.

If the SPD delegates give the thumbs up at the party congress on January 21st, formal coalition talks could in theory begin as soon as the following day.

READ ALSO: What we know about the proposed new coalition deal