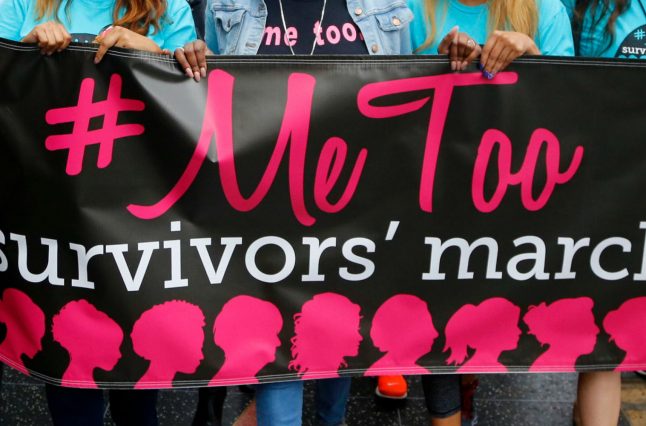 In early January, the liberal newspaper Die Zeit became the first German publication to publish sexual assault allegations against a powerful figure in the film industry.

Three former actresses, two of whom chose to give their names, claimed that in the 1990s the director Dieter Wedel sexually abused them. According to one of the women, when she turned up at the director's hotel room in Munich in 1996 for an interview, he violently threw her against a wall before forcing her to have sex with him. Another of the women claimed he tried to rape her in 1991 but that she was able to get away.

Wedel, now in his 70s, is best known for directing the award-winning TV miniseries Der Schattenmann.

Die Zeit emphasizes the research that it put into the article before it was published.

The newspaper noted its concerns about the #MeToo campaign, which snowballed after Hollywood producer Harvey Weinstein was accused of sexual assault by several women.

“We knew we had to be cautious, given the hysterical features that the #MeToo debate has occasionally exhibited,” Die Zeit deputy editor-in-chief Sabine Rückert wrote.

But she goes on to say that the two journalists who investigated the piece conducted 50 interviews over a period of two months. As well as questioning the women themselves, they conducted interviews with people who were acquainted with the allegations from the time they allegedly occurred. They also spoke with a therapist who agreed to forego her duty to confidentiality.

The newspaper came to the conclusion that it was “highly likely” that the attacks took place.

In the article, Wedel is also accused of humiliating actresses on set. One cameraman who spoke to Die Zeit said that the director bullied an actress over months during filming for Affäre Semmeling, after she refused his sexual advances.

Wedel for his part has denied all the allegations in the most explicit terms. He also told the newspaper that, while he was often loud and emotional on set, this never had anything to do with his private life.

‘Execution by the media’

Despite how intensively researched the Die Zeit article was, it faced immediate criticism.

Writing in Die Welt, the court correspondent Gisela Friedrichsen described the accusations as “execution via the media.”

“The supposition of innocence, the statute of limitations and even investigative work seems to be irrelevant” to Die Zeit, Friedrichsen claimed.

Accusing Die Zeit of ignoring the fact that the crimes took place over 20 years ago – and thus beyond the statute of limitations – Friedrichsen argued that the newspaper knew that there was no chance of the police investigating the crimes.

She also accused the women of using the public attention created by #MeToo to maximize their publicity.

“These actresses kept their silence for decades and then only spoke when they knew they would get maximum exposure – and when there was as good as no chance that their accusations could be checked,” she wrote.

Friedrichsen also compared the accusations to another case which has been cited frequently in Germany since #MeToo started making headlines in the autumn – that of Jörg Kachelmann.

The Swiss weatherman was accused by several women in 2010 of sexual assault and the women’s allegations were extensively reported in the media. Kachelmann spent four months in German custody as the claims were investigated.

But prosecutors dropped the case after establishing that his chief accuser had inflicted the wounds herself, which she claimed had resulted from the rape. The case also caused scandal when it was found out that the magazine Bunte had paid women €50,000 to publicize their allegations.

Kachelmann is still trying to repair the damage to his reputation.

According to Friedrichsen, both Kachelmann and Wedel have become targets for “the #MeToo propagandists” because of their sexual morals. Both men are known to have had relationships with many women – Wedel has six children, each with a different woman.

The accusation of trial by media has also met with resonance in legal circles. Alexander Stevens, a Munich lawyer who specializes in sexual assault cases, complained in an article for anwalt.de that the #MeToo debate was making a mockery of the presumption of innocence.

Academic studies have found that around 4 percent of rape investigations in Germany are dropped because investigators have found that the accusation was false. But Stevens dismisses these figures, arguing that in roughly half of all cases examined by doctors in Germany the alleged victim likely made up the claims. He warned that, under these circumstances, it was reckless to make hasty judgements on sexual assault cases.

Stevens further complained that cases where court found that men had been falsely accused of sexual crimes were being ignored by the media, while mere allegations were enough to make headlines.

He argued that it is particularly important to uphold the statute of limitations, as “it is difficult or impossible to prove sexual crimes 10, 20 or 30 years later when there are no witnesses or proof. In no other crime are false statements – intentional or otherwise – more likely.”

Not everyone agrees though.

NetzwerkB, an association for sexual violence victims, called last week for the end to limitation periods for acts of sexual harassment and assault.

“By abolishing the limitation periods, all old cases for which proof is possible could be investigated, and it would send a clear signal to society that violence is not considered acceptable and that victims are not forced to remain silent,” the organization said.