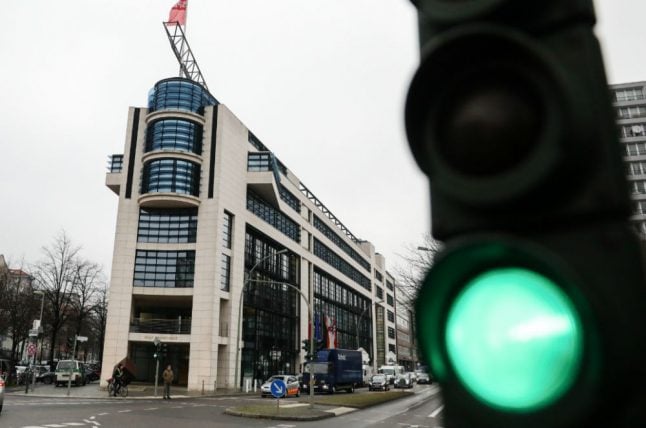 The Willy Brandt Haus - headquarters of the SPD party - on Friday. Photo: DPA

The in-principle pact after months of paralysis averts the unpopular prospect of snap elections for now, but there are still several hurdles to clear, some of which may prove perilous.

The Social Democratic Party (SPD) has promised members a say at key junctures of the negotiation process with Merkel's CDU-CSU alliance.

The first key date will be January 21st, when around 600 party delegates will gather in Bonn to look at the outline deal obtained Friday.

Deep scepticism runs through the party, because of fears that to again govern in Merkel's shadow will force the SPD to betray its ideals and further damage its voter appeal.

However, SPD chief Martin Schulz, who had also initially ruled out governing under Merkel, praised the deal Friday and said the party leadership had unanimously backed the coalition blueprint.

If the SPD delegates give the thumbs up, formal coalition talks could in theory begin as soon as January 22nd.

The broad policy outline will then have to be fleshed out over weeks of talks involving policy experts into a formal “coalition contract”.

This means that negotiators will return to the table to thrash out the fine print that will essentially determine Germany's political programme for the next four years.

In 2013, when Merkel was seeking the current coalition with the SPD, this process took three weeks.

But a successful conclusion of the talks does not spell the end, because the SPD's 450,000 rank and file will then be called to a vote on whether to sign on the dotted line.

The CSU's chief Horst Seehofer said he hoped a new government would be in place before Easter which falls on April 1st.

If all goes well for her, Merkel, after 12 years in power, will be elected for a fourth term by a majority of lawmakers in the Bundestag.

She would then likely face the most complicated task — holding the coalition together for four years despite their deep-seated differences.

Some political observers expect a now weakened Merkel to leave early and allow a successor to settle into the chancellorship ahead of 2021 elections.

Oskar Niedermayer of Berlin's Free University said that “in the interest of her party's electoral strength, she should not stay in office for the entire legislative term”.

Another analyst, Lothar Probst of Bremen University, told the Handelsblatt business daily that the coalition could break up early in a fight, which would mean “the deck is reshuffled and Merkel's chancellorship could reach an early end”.

SEE ALSO: What we know so far about the proposed new coalition deal